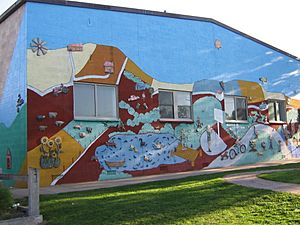 Bordertown is a small South Australian town near the Victorian border. It is where the Dukes Highway and the railway line, the two main routes between Adelaide and Melbourne, cross Tatiara Creek.

Bordertown is the commercial and administrative centre of the Tatiara District Council. Tatiara is the local Aboriginal word for "Good Country". Bordertown was established in 1852 when a direct route across the 90-mile desert was being planned for gold escorts from the Victorian goldfields to Adelaide. Police Inspector Alexander Tolmer was instructed to create a town as close as practical to the border. Tolmer was upset when the town was not named after him, but that was made up for by naming several sites around Bordertown after him, such as Tolmer Park and Tolmer Takeaway. Bordertown is also the birthplace of former Prime Minister of Australia, Bob Hawke.

Bordertown is home to the historic Clayton Farm Heritage Museum. It is also famous for its white Kangaroos which have been bred for zoos and animal shelters around Australia. The lightning clock on the main street marks the site of the first electricity source.

Bordertown has a number of heritage-listed sites, including:

Bordertown is on the main routes by road and rail between Adelaide and Melbourne. There are several bus services daily towards each of Adelaide, Melbourne, and Mount Gambier. The Overland train stops twice a week each way. Most rail traffic is freight passing through, although the local grain silos are also served by rail. In 2012, the crossing loop at Bordertown railway station was lengthened to 1500m.

All content from Kiddle encyclopedia articles (including the article images and facts) can be freely used under Attribution-ShareAlike license, unless stated otherwise. Cite this article:
Bordertown, South Australia Facts for Kids. Kiddle Encyclopedia.