Wolseley (formerly Tatiara) is a small South Australian town near the Victorian border. It is five kilometres south of the Dukes Highway and 13 kilometres east of Bordertown. It was first proclaimed a town in 1884.

The town was surveyed in 1884, and initially named Tatiara, which was described as an "Aboriginal word from the Jackegilbrab Tribe which HC Talbot states is divided into six clans (Kooinkill, Wirriga, Chala, Camiaguigara, Niall & Nunkoora)". The railway station was named after Lord Wolseley, who was the Commander-in-Chief of the British Army. The name of the town was changed to match the name of the station on 20 February 1941. 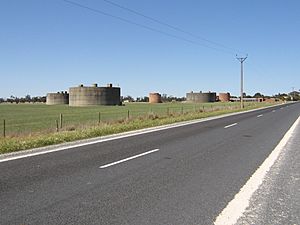 Early in World War II, RAAF No. 12 Inland Aircraft Fuel Depot was established at Wolseley, with an initial capacity of 1.27 megalitres (280,000 imp gal; 340,000 US gal) in three tanks camouflaged to look like farm buildings. The depot started operations in 1942 and three additional tanks were added later. It was disbanded on 14 June 1944. It is listed on the South Australian Heritage Register as the Wolseley Inland Aircraft Fuel Depot.

Wolseley is in the Tatiara District Council, the state electoral district of MacKillop and the federal Division of Barker.

In 1936, to help overcome some of the inconveniences of the break of gauge, containers were introduced to allow though shipment of goods without the need for transshipment.

All content from Kiddle encyclopedia articles (including the article images and facts) can be freely used under Attribution-ShareAlike license, unless stated otherwise. Cite this article:
Wolseley, South Australia Facts for Kids. Kiddle Encyclopedia.