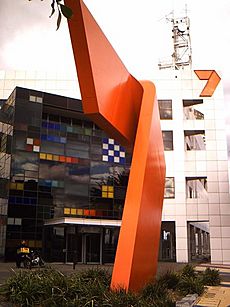 Seven Network is one of three major television networks in Australia. In recent years, it has grown into a diversified media company. Seven Network's main shareholder is Kerry Stokes.

Seven Network's studio headquarters are in a converted warehouse at Jones Bay Wharf in Pyrmont, Sydney. Its headquarters for its news department are in Martin Place, Sydney. Seven's major production facilities are at Epping in Sydney's northern suburbs. Seven Network are planning to move their production facilities to a specially built site at the Australian Technology Park in Redfern.

All content from Kiddle encyclopedia articles (including the article images and facts) can be freely used under Attribution-ShareAlike license, unless stated otherwise. Cite this article:
Seven Network Facts for Kids. Kiddle Encyclopedia.