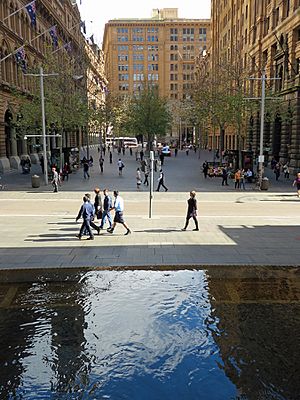 Martin Place is a pedestrian mall in the central business district of Sydney, New South Wales, Australia. Martin Place has been described as the "civic heart" of Sydney. As home to the Reserve Bank of Australia, the Commonwealth Bank of Australia, Macquarie Bank, Westpac and other corporations, it is also a centre of business and finance. The Sydney GPO and the Seven Network's Sydney news centre are also located on Martin Place.

The initial "Martin Place" was the section between George Street and Pitt Street, officially opened 1892, and was named in honour of Sir James Martin, the three time Premier of New South Wales and Chief Justice of Supreme Court of New South Wales. Closed to traffic in stages from 1971, Martin Place is surrounded by many heritage buildings and features the 1927 World War I ANZAC Cenotaph, water fountain, entertainment area, railway access and pedestrian seating. 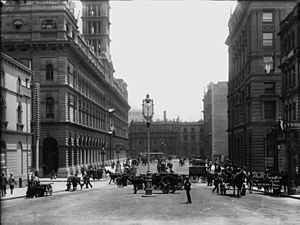 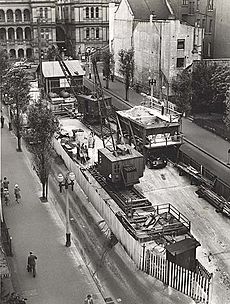 Eastern end of Martin Place during the construction of Martin Place station under the street. The exposed backs of buildings on the right (now replaced by the Reserve Bank of Australia building) still bear evidence of the demolitions that extended Martin Place to Macquarie Street in 1935.

Today's Martin Place was built in several phases. Until the late 19th century, only the section between Pitt Street and Castlereagh Street existed in anything resembling the present form, as a short street named Moore Street. Between Pitt Street and George Street there was only a small laneway (similar to nearby surviving laneways such as Angel Place or Hosking Place). In 1863, construction began on the present General Post Office Building on the south side of the laneway. The building was constructed in stages, and when the design changed to provide for a main façade on the longer north side (instead of facing George Street to the west), there were concomitant proposals to widen the existing laneway into a street connected to Moore Street. A fire which destroyed properties to the north of the laneway provided the impetus for the construction, and in 1892 (a year after the Venetian-Italianate-style General Post Office was completed) the widened street was officially opened and named "Martin Place", in honour of New South Wales premier and Chief Justice James Martin. The General Post Office occupied the entire southern frontage of the street.

Both Moore Street and Martin Place became prominent centres of business and finance in Sydney. In 1913, the headquarters of the Commonwealth Bank of Australia was constructed on the corner of Moore Street and Pitt Street. In later years, other banks followed with a range of impressive buildings (see "Architecture" below). In 1921, Moore Street was renamed as part of Martin Place.

Conscription rallies for World War I took place here. In 1927, a Cenotaph commemorating the WWI dead was erected. 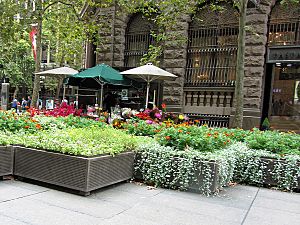 Soon after, the Sydney Municipal Council proposed to extend the street further east towards Macquarie Street. However, the plan was delayed by concerted opposition from landowners of the buildings that would have to be demolished to make way for the extension. One of the buildings demolished to make way for the extended Martin Place was St Stephen's Presbyterian Church, on the east side of Phillip Street, which was replaced by the present church on Macquarie Street in 1935. The extension was finally completed in 1935, resulting in the Martin Place stretching from George Street to Macquarie Street seen today.

The increasingly important role of Martin Place as the "heart" or "town square" of Sydney (see "Events" below) led to calls for the street to be pedestrianised. This was done progressively from 1971 until 1979, when the whole street became a pedestrian mall. The closure of the street to traffic was partly timed to coincide with the construction of Martin Place railway station under the eastern section of the street. The station also opened in 1979. Leo Port, the Lord Mayor of Sydney was an advocate of civic design, and was partly responsible for the pedestrianisation of Martin Place and Sydney Square.

A number of the street's older buildings were demolished in this period to make way for modernist buildings. The most prominent of these is the MLC Centre, designed by Harry Seidler.

Panoramic view of the western end of Martin Place: the General Post Office (No. 1) is on the right, the Bank of Australasia Building (No. 2) and Challis House (No. 4) are on the left.

Martin Place has a large collection of buildings of various styles, from neo-classical to contemporary. 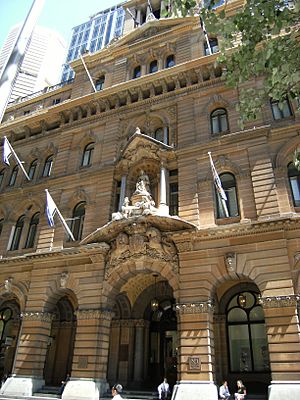 The Sydney General Post Office (No. 1 Martin Place) is located at the western end of Martin Place, between George and Pitt Streets. Designed by colonial architect James Barnet, the building was constructed in stages from 1866 to 1891. Barnet's building features a neo-classical sandstone facade, with a colonnade running around the building at street level. Above the centre of the 100-metre Martin Place facade is the clocktower. This building was the headquarters of the NSW postal system until 1996, when it was sold and refurbished. The building now contains shops, cafes, restaurants, and bars. The Westin hotel and Macquarie Bank office towers stand in the former courtyard, now converted into an atrium. Australia Post maintains a presence in the form of a "Post Shop" at the corner of Martin Place and George Street.

Challis House (No. 4 Martin Place) stands on land bought in 1906 for £500 per square foot by the University of Sydney from University endowment funds. The building was designed by W. L. Vernon, Government Architect and Robertson and Marks, Architects, and completed in 1907. The building was named Challis House after John Henry Challis, who in 1880 had bequeathed his estate valued at £276,000 (over $30 million in 2011) to the University. This art deco building is adorned with the Sydney University crest above the door, and forms one of the most important parts of the University's property portfolio. In 2002, the university entered a 99-year lease of the property. 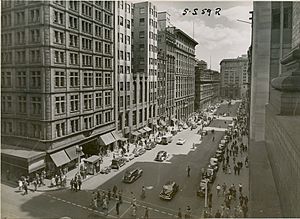 Martin Place in the 1950s. The high rise building on the corner to the left is the Commercial Travellers Club Building and the 1930 wing of the Australia Hotel next to it. Both buildings were demolished in 1971–72 to make way for the MLC Centre.

The MLC Centre (No. 9 Martin Place) sits mainly upon the site of the Australia Hotel, demolished to make way for this 228-metre, reinforced concrete skyscraper, designed by Harry Seidler. The building is a modernist, octagonal column. At the time of its opening in (1977) it was the tallest reinforced concrete office building in the world, and was the tallest building outside North America. Construction of the building was controversial because it caused the demolition of several historic landmark buildings. Tenants include the Consulate of the United States of America. 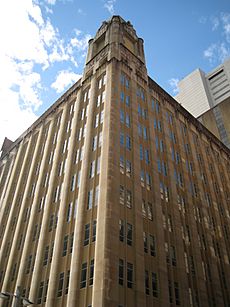 The Henry Davis York building (No. 38-46 Martin Place) is an 11-storey art-deco building on the corner of Castlereagh Street and Martin Place. It was the former headquarters of MLC, a large finance company taken over by the National Australia Bank in 2000. Its current principal tenant is law firm Henry Davis York. The large, red, carved letters "MLC" are still visible on the clocktower, although a clock is currently missing. 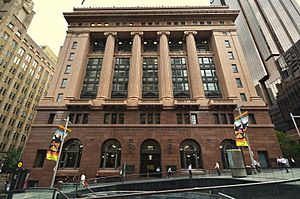 The State Savings Bank building (No. 48 Martin Place), later also owned by the Commonwealth Bank of Australia, has a distinctive terracotta and pink granite Beaux-Arts façade. It was built as the headquarters of the Government Savings Bank of NSW and opened in 1928. The interior features large scagliola columns, extensive use of marble, and a plaster and pressed metal ceiling. The building's square trading hall was originally one of the largest in the world. A stately vault is housed in the basement.

The Australian Provincial Assurance building (No. 53-63 Martin Place) (formerly Overseas Union Bank) is a 14-storey art-deco building on the corner of Elizabeth Street and Martin Place. One of its current tenants is the Lindt concept store and café.

The Colonial Building was the headquarters of the NSW State Bank, which was taken over by Colonial 1996 to form the Colonial State Bank, which itself was taken over in 2000 by the Commonwealth Bank of Australia. This 1986 post-modern building with its dark glass facade features a 36-storey tower atop a 2-storey atrium. The former banking chamber now contains the Sydney newsdesk of the Seven Network's Sydney-based Seven News which is ATN's current flagship programme from its production division. Another ad-hoc "live audience" stands on the street outside the windows every morning for two of the station's breakfast programs, Sunrise and Weekend Sunrise and mid-morning program The Morning Show as well as the other Seven News bulletins. Sky News Australia also has a small single camera studio facing Elizabeth Street.

The Westpac building (No. 60 Martin Place), between Phillip Street and Macquarie Street, is itself a non-descript 28-storey 1960s office block, but is currently planned to be demolished to make way for a large new development. 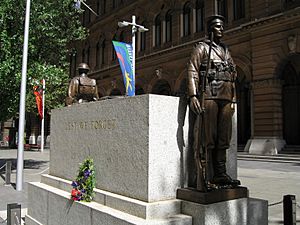 Other features of Martin Place include:

Stairs leading into Martin Place railway station, one of several entrances to the underground station located along Martin Place.

The new Sydney Metro line will include a station located underneath the existing station and is due to open in 2024. 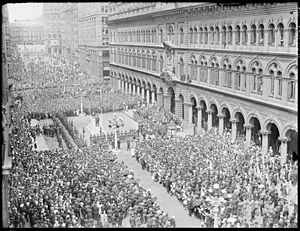 From its origins as a narrow laneway, Martin Place has over time become the "civic heart" of Sydney. Apart from its central location, the presence of the General Post Office and its attached telegraph office meant that this was the location where important news first arrived in the city. As a result, in earlier decades this was a focal point for gatherings to await or celebrate significant events. The cenotaph was sited on Martin Place outside the General Post Office because this was where crowds gathered in the city at the end of World War I. Martin Place is now the centre of the city's official war commemoration ceremonies. The extensions of the street gave it new significance in the civic scheme of the city, forming a broad and open connection between George Street, the original "High Street" and commercial axis, and Macquarie Street, the ceremonial avenue and governmental axis. People still gather on the plaza today to participate in significant events, for example to watch live broadcasts on a large television screen during the 2000 Summer Olympics, or the apology to the Stolen Generation in 2008. An amphitheatre built into the plaza near Pitt Street has hosted music and cultural events, as well as political protests.

Some regular civic events now held on Martin Place include: 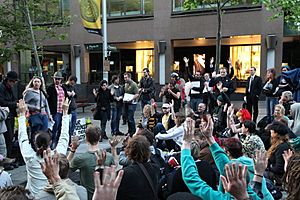 Some recent events which have occurred on the square include: 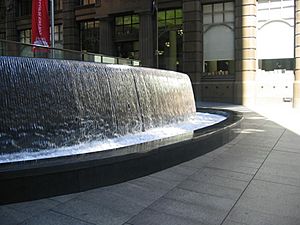 Lloyd Rees fountain featured in the film The Matrix. 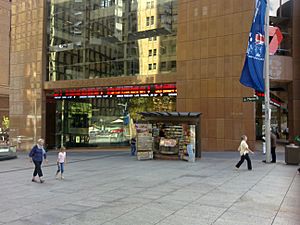 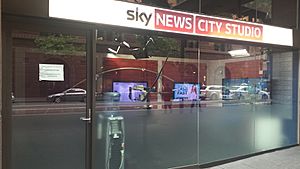 All content from Kiddle encyclopedia articles (including the article images and facts) can be freely used under Attribution-ShareAlike license, unless stated otherwise. Cite this article:
Martin Place Facts for Kids. Kiddle Encyclopedia.