Prince Philip was on active service in the Royal Navy throughout the Second World War. At the end of the war he was on the destroyer HMS Whelp in the Pacific, and was in Tokyo Bay for the Japanese surrender on 2 September 1945.

After he changed his nationality, he became known as Philip Mountbatten. His cousin was Patricia Knatchbull, 2nd Countess Mountbatten of Burma.

On 19 November 1947, he was made a Knight of the Garter, and given the style of "Royal Highness". 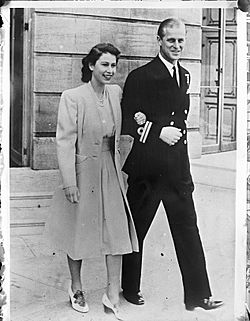 On 20 November 1947, he married Princess Elizabeth, the heiress presumptive to King George VI, he became the Duke of Edinburgh. He was made a Prince of the United Kingdom in 1957.

He was the first member of the Royal Family to be interviewed on television, in May 1961. He has traveled with the Queen on all 251 of her royal trips.

Prince Phillip retired from royal duties and visits near the end of 2017.

On 16 February 2021, Philip was admitted to King Edward VII Hospital as a “precautionary measure” after feeling unwell. On 23 February, it was announced that he had an infection. 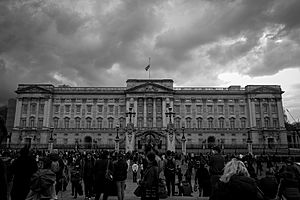 Buckingham Palace on 9 April 2021; the Union Flag is flown at half-mast as crowds gather.

Philip died on the morning of 9 April 2021 at Windsor Castle, aged 99, two months before his 100th birthday. He was the longest-serving royal consort in British history. In private, the Queen described her husband's death as "having left a huge void in her life".

The cause of death has not been disclosed, though the palace said Philip died peacefully. Philip's daughter-in-law, the Countess of Wessex, confirmed the official statement, describing his death as "...so gentle. It was just like somebody took him by the hand and off he went." His death led to the commencement of Operation Forth Bridge, the plan for publicly announcing his death and organising his funeral. The funeral took place on 17 April 2021 at St George's Chapel, Windsor Castle, and he was interred in the Royal Vault inside St George's.

Representatives of countries around the world sent condolences to the Royal Family upon his death.

All content from Kiddle encyclopedia articles (including the article images and facts) can be freely used under Attribution-ShareAlike license, unless stated otherwise. Cite this article:
Prince Philip, Duke of Edinburgh Facts for Kids. Kiddle Encyclopedia.