Princess Michael of Kent (born Baroness Marie Christine von Reibnitz; 15 January 1945) is a member of the British Royal Family of German, Austrian and Hungarian descent. She is married to Prince Michael of Kent, a grandson of King George V. Princess Michael was an interior designer before becoming an author; she has written several books on European royalty (mostly her cousins). She also undertakes lecture tours as well as supporting her husband in his public duties.

Marie Christine Anna Agnes Hedwig Ida von Reibnitz was born on 15 January 1945 in Karlsbad, a town then in German-populated Sudetenland and now known as Karlovy Vary in the Czech Republic. She was born shortly before the defeat of Nazi Germany and end of World War II in Europe, near the family estates of her Austrian maternal grandmother, Princess Hedwig von Windisch-Graetz; the expulsion of Germans resident in Czechoslovakia followed later that year. Princess Michael is the younger daughter of Baron Günther Hubertus von Reibnitz (Freiherr) by his second wife Countess Maria Anna Carolina Franziska Walburga Bernadette (1911–1998), daughter of Count Friedrich Szapáry von Muraszombath, Széchysziget und Szapár, the Austro-Hungarian Ambassador to Saint Petersburg at the outbreak of the First World War.

Princess Michael's father was a Nazi party member serving as a Sturmbannführer (Major) in the SS during the Second World War. The parents divorced in 1946; along with her mother and elder brother, Baron Friedrich (Fred) von Reibnitz (1942), Princess Michael moved to Australia where she was educated at Kincoppal School. Marie Christine and her mother established a beauty salon, while Fred von Reibnitz (now living in Canberra) joined the Australian Public Service. She subsequently moved to London to study History of Fine and Decorative Art at the Victoria and Albert Museum. 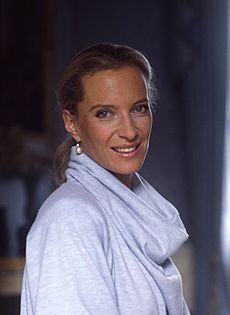 Her first husband was the English banker Thomas Troubridge, younger brother of Sir Peter Troubridge, 6th Baronet. They met at a boar hunt in Germany and were married on 14 September 1971 at Chelsea Old Church, London. The couple separated in 1973 and were civilly divorced in 1977 (the marriage was ecclesiastically annulled by the Pope in May 1978).

One month after the annulment, on 30 June 1978, at a civil ceremony in Vienna, Austria, she married Prince Michael of Kent, the son of Prince George, Duke of Kent (1902–1942) and Princess Marina of Greece and Denmark (1906–1968). Prince Michael is a first cousin of Queen Elizabeth II. Michael presented Marie Christine with a two-stone sapphire-and-diamond ring made from stones that belonged to his mother, Princess Marina. For the ball held after the wedding, she wore the City of London diamond fringe tiara and a 70s style dress. Upon their marriage, she was accorded the style and title of Her Royal Highness Princess Michael of Kent, the female equivalent to her husband's title: not being of royal birth, she is therefore not titled Princess Marie Christine. After receiving Pope John Paul II's permission, the couple later received a blessing of their marriage in a Roman Catholic ceremony on 29 June 1983 at Archbishop's House, London.

Prince and Princess Michael of Kent have two children:

Since a teenager, Princess Michael has held a long and enduring passion for the conservation of cheetahs and she is international royal patron for the Cheetah Conservation Fund in Namibia.

All content from Kiddle encyclopedia articles (including the article images and facts) can be freely used under Attribution-ShareAlike license, unless stated otherwise. Cite this article:
Princess Michael of Kent Facts for Kids. Kiddle Encyclopedia.