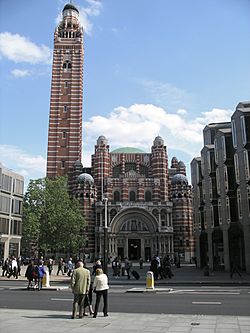 The cathedral is near Victoria in the City of Westminster. It is the largest Roman Catholic church in England and Wales. It should not be confused with Westminster Abbey.

The cathedral was opened in 1903. It was designed by John Francis Bentley and is in the style of Byzantine church architecture. The nave is the widest of any church in England. The sanctuary is higher than the nave, so that the altar can be seen from any part of the nave. A very large crucifix hangs from the chancel arch. The Archiepiscopal Throne or cathedra, of marble and mosaic, is modelled on the Papal Throne at the Basilica of St. John Lateran in Rome. There are beautiful marble pillars which are all carved differently. In the crypt there are monuments to famous people.

Westminster Cathedral has a famous choir. The first Master of Music (choirmaster) was Sir Richard Runciman Terry. Since 2000, the Master of Music has been Martin Baker. Mass is sung every day.

The choir are famous for singing Gregorian chant and polyphony of the Renaissance. Composers such as Benjamin Britten and Ralph Vaughan Williams have written music for the choir.

All the boys of the Choir are boarders at the nearby Westminster Cathedral Choir School.

The organ is very large. It is in the west gallery (above the entrance). It was built by the organ builder Henry Willis III from 1922 to 1932. One of Louis Vierne's best-known organ pieces, "Carillon de Westminster," was composed for it and dedicated to the builder.

On 28 May 1982, the first day of his six-day visit to the United Kingdom, Pope John Paul II celebrated Mass in the Cathedral.

In 1995, Cardinal Basil Hume invited HM The Queen. This was the first visit of a reigning monarch of the United Kingdom to a Catholic liturgy since 1688 when James II & VII was king.

All content from Kiddle encyclopedia articles (including the article images and facts) can be freely used under Attribution-ShareAlike license, unless stated otherwise. Cite this article:
Westminster Cathedral Facts for Kids. Kiddle Encyclopedia.