Thomas Becket was an English priest, and Archbishop of Canterbury, who was murdered in Canterbury Cathedral in 1170. People used to think his name was Thomas á Becket, but it is now known to be wrong.

Becket was born in Cheapside, London. He was an intelligent child, who also enjoyed playing sports and hunting. At age 16, he left England to study in Paris.

In 1143, Becket joined the household of Theobald of Bec, as a clerk. He became Archbishop of Canterbury in 1162. He had been a close friend of King Henry II, but they argued about the rights of the Church. This argument between Henry and Becket ended their friendship. Becket resigned as Lord Chancellor and sought to extend the rights of the archbishopric. This led to a series of conflicts with the King. One was on the jurisdiction of secular courts over English clergymen. 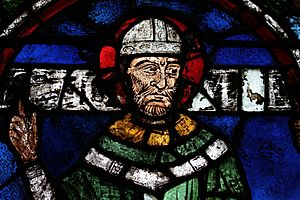 Attempts by Henry to influence the other bishops against Becket began in Westminster in October 1163. The King sought approval of the traditional rights of the royal government over the church. Henry held a meeting with most of the higher English clergy at Clarendon Palace on 30 January 1164. Becket was officially asked to agree to the King's rights.

Henry summoned Becket to appear before a great council at Northampton Castle on 8 October 1164, to answer allegations. Convicted on the charges, Becket stormed out of the trial and fled to Europe. King Louis VII of France offered Becket protection. He spent nearly two years in the Cistercian abbey of Pontigny, until Henry's threats made him return to Sens.

Beckett returned to England, but the dispute continued. He excommunicated his enemies in the Church, and threatened to do the same to Henry.

Upon hearing reports of Becket's actions, Henry said things which were understood as wishing Becket killed. The king's exact words are unknown and several versions have been reported. The most commonly quoted, as handed down by oral tradition, is "Who will rid me of this troublesome priest?".

Becket was killed by four of the King's knights on 29 December 1170. He became a saint in 1173. His major shrine is in Canterbury, but was destroyed by order of Henry VIII during his reign.

All content from Kiddle encyclopedia articles (including the article images and facts) can be freely used under Attribution-ShareAlike license, unless stated otherwise. Cite this article:
Thomas Becket Facts for Kids. Kiddle Encyclopedia.