City of London facts for kids

The City of London is a city and county that contains the historic centre and central business district of London. It constituted most of London from its settlement by the Romans in the 1st century AD to the Middle Ages, but the agglomeration has since grown far beyond the City's borders. The City is now only a tiny part of the metropolis of London, though it remains a notable part of central London.

It is here in the City of London where most of the United Kingdom's financial trade is done. It is a very small area, covering only a square mile, and has a very small resident population (8,000). However, many people come to work here and during the day it can be very busy, with some 300,000 people in it.

The City vies with New York City as the financial capital of the world: many banking and insurance institutions have their headquarters there. The London Stock Exchange (shares and bonds), Lloyd's of London (insurance) and the Bank of England are all based in the City.

Over 500 banks have offices in the City, and the City is an established leader in trading in Eurobonds, foreign exchange, energy futures and global insurance. The Alternative Investment Market, a market for trades in equities of smaller firms, is a recent development. In 2008, the City of London accounted for 4% of UK GDP.

London is the world's greatest foreign exchange market, with much of the trade conducted in the City of London. Of the $3.98 trillion daily global turnover, as measured in 2007, trading in London accounted for around $1.36 trillion, or 34.1% of the total. The Pound Sterling, the currency of the United Kingdom, is globally the fourth most traded currency and the third most held reserve currency.

Since 1991 Canary Wharf, a few miles east of the City in Tower Hamlets, has become a second centre for London's financial services industry and houses many banks and other institutions formerly located in the Square Mile. This development does not appear to have damaged the City: growth has continued in both locations.

The City is the site of Roman Londinium, and the archaeological remains are on display in the Museum of London, City Wall.

The City has many churches designed by Sir Christopher Wren, including St Paul's Cathedral. The City was the site of the Great Fire of London in 1666. 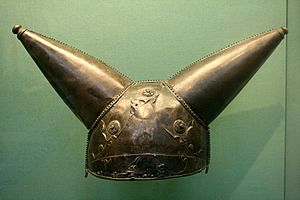 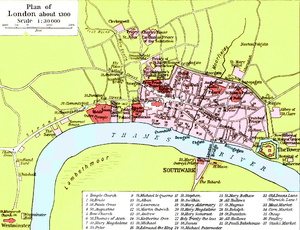 London in 1300: most was still within the old Roman city wall.

It used to be widely held that Londinium was first established by merchants as a trading port on the tidal Thames in around 47 AD, during the early years of the Roman occupation of Britain. However, this date is only supposition. Many historians now believe London was founded some time before the Roman conquest of Britain in 43 AD.

Archaeologists have claimed that as much as half of the best British Iron Age art and metalwork discovered in Britain has been found in the London area. One of the most prominent examples is the famously horned "Waterloo Helmet" dredged from the Thames in the early 1860s and now exhibited at the British Museum.

Fire, bombing and post-World War II redevelopment has meant that the City, despite its history, has relatively few intact notable historic structures. 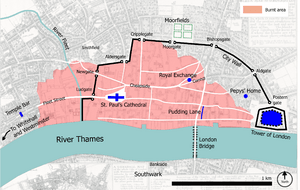 Map showing the extent of the Great Fire of London, which destroyed nearly 80% of the City 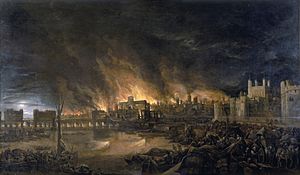 The 1666 Great Fire as depicted in a 17th-century painting: it depicts Old London Bridge, churches, houses, and the Tower of London as seen from a boat near Tower Wharf

The City was burned severely on a number of occasions, the worst being in 1123 and (more famously) in the Great Fire of London in 1666. Both of these fires were referred to as the Great Fire.

The boundary of the City

The size of the City was constrained by a defensive perimeter wall, known as London Wall, which was built by the Romans in the late 2nd century to protect their strategic port city. However the boundaries of the City of London no longer coincide with the old city wall, as the City expanded its jurisdiction slightly over time.

Most of the wall has disappeared, but several sections remain visible. A section near the Museum of London was revealed after the devastation of an air raid on 29 December 1940 at the height of the Blitz. Other visible sections are at St Alphage, and there are two sections near the Tower of London.

The City has no sizable parks within its boundary, but does have a network of a large number of gardens and small open spaces. These range from formal gardens such as the one in Finsbury Circus, containing a bowling green and bandstand, to churchyards such as St Olave Hart Street, to water features and artwork in courtyards and pedestrianised lanes.

The Thames and its riverside walks are increasingly being valued as open space and in recent years efforts have been made to increase the ability for pedestrians to access and walk along the river.

All content from Kiddle encyclopedia articles (including the article images and facts) can be freely used under Attribution-ShareAlike license, unless stated otherwise. Cite this article:
City of London Facts for Kids. Kiddle Encyclopedia.