St Helen's (previously known as the Aviva Tower or the Commercial Union building) is a commercial skyscraper in London, United Kingdom. It is 118 metres (387 ft) tall and has 23 floors. The postal address is No. 1, Undershaft, though the main entrance fronts onto Leadenhall Street, in the City of London financial district.

The building was designed by the Gollins Melvin Ward Partnership in the international style: the stark rectilinear geometry and detailing of the building was influenced by Ludwig Mies van der Rohe and is somewhat reminiscent of his Seagram Building in New York City. It was built by Taylor Woodrow Construction as one of only four high-rise buildings in London using a top-down engineering design where the lower office floors are suspended from above rather than supported from below.

In 1992, the building was heavily damaged in the Baltic Exchange bombing carried out by the Provisional IRA, as a result of which it was substantially renovated.

The building was sold in 2003 by the Abu Dhabi Investment Authority to property developer Simon Halabi. In 2007, it was reported that Halabi was considering plans to demolish the building and replace it with a much taller tower, but this plan was not fulfilled. In 2011, it was reported that the building had been sold to an undisclosed Far Eastern private investor for £288 million. Plans for the site submitted in February 2016 feature a 310 m-tall 72-floor tower largely given to office space. In November 2016, planning permission was granted for the Trellis Tower, which will house up to 10,000 workers and which, upon completion, will be the tallest building in the City of London and the second tallest building in the UK, after The Shard. 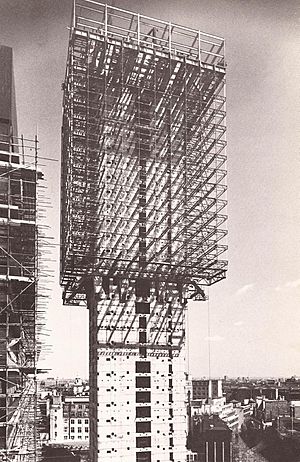 The Commercial Union building under construction in 1968. Office floors were suspended from steel trusses cantilevered from the mid- and roof-level plant floors

The construction of the Commercial Union building was undertaken by Taylor Woodrow Construction.

The structure comprises a central concrete service core, surrounded by a steel framework suspended from projecting steel truss sections at the mid- and roof-level plant floors. The office floors are suspended from these steel frameworks; the roof section supports twelve floors while the midsection supports thirteen floors. The steel hangers are installed in alternate window mullions and vary in size: 0.23 m × 0.05–0.23 m. This suspended construction design was aimed at maximising floor space by largely eliminating the need for support columns.

The new piazza in front of the two new buildings was below street level, and steps were constructed on two sides. Air intake louvres for ventilating the building's five sub-surface levels were built into the treads of the steps. The piazza was planted with semi-mature lime trees.

All content from Kiddle encyclopedia articles (including the article images and facts) can be freely used under Attribution-ShareAlike license, unless stated otherwise. Cite this article:
St. Helen's (skyscraper) Facts for Kids. Kiddle Encyclopedia.