Guildhall School of Music and Drama facts for kids 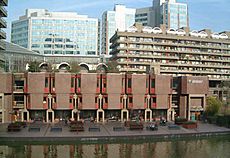 Guildhall School of Music and Drama

Guildhall School of Music and Drama is a school for music and drama in London, England. It was founded in 1880. Students can study Music, Opera, Drama, Stage Management and Technical Theatre.

The Guildhall School does not just teach students at the school. They also organize music examinations in the whole of Britain for anyone learning musical instruments. In 2004 these examinations joined with those of Trinity College London to form Trinity Guildhall Examinations. Today, Trinity Guildhall offers qualifications in performing and teaching in music, speech and drama, and dance to external students (students who are not studying at the school).

Today the school has a 308-seat drama and opera theatre, concert hall, lecture / recital hall and a small studio theatre. The students of the school regularly perform all over London. In 2008 work began on a large extension to the School. It will cost about £90 million.

Famous musicians who studied there include the trumpeter Alison Balsom, the composer Thomas Adès, the flautist Sir James Galway, the pianist Paul Lewis, the violinist Tasmin Little and the singers Kate Royal and Bryn Terfel.

All content from Kiddle encyclopedia articles (including the article images and facts) can be freely used under Attribution-ShareAlike license, unless stated otherwise. Cite this article:
Guildhall School of Music and Drama Facts for Kids. Kiddle Encyclopedia.