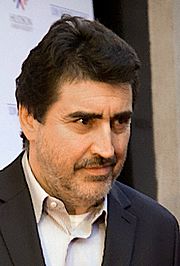 Alfred Molina (born Alfredo Molina; 24 May 1953) is an English actor. He is known for his roles as Diego Rivera in Frida, Satipo in Raiders of the Lost Ark, Dr. Octopus in Spider-Man 2, and as Maxim Horvath in The Sorcerer's Apprentice.

Molina was born on 24 May 1953 in Paddington, London, England to a Spanish mother and Italian father. He grew up in Notting Hill, London. He studied at Guildhall School of Music and Drama.

Molina was married to actress Jill Gascoine from 1986 until her death in 2020. He has one daughter from another relationship. In 2019, he became domestic partners with Jennifer Lee.

All content from Kiddle encyclopedia articles (including the article images and facts) can be freely used under Attribution-ShareAlike license, unless stated otherwise. Cite this article:
Alfred Molina Facts for Kids. Kiddle Encyclopedia.