Gravity Falls is an American animated television series produced by Disney Television Animation that first aired on Disney Channel (then later transitioned to Disney XD) from June 15, 2012 to February 15, 2016. Created by Alex Hirsch, the series follows the adventures of Dipper Pines (voiced by Jason Ritter) and his twin sister Mabel (voiced by Kristen Schaal) who are sent to spend the summer with their great-uncle (or "Grunkle") Stan (voiced by Hirsch), in a mysterious town full of paranormal forces and supernatural creatures. The kids help Stan run "The Mystery Shack", the tourist trap that he owns, while also investigating the local mysteries.

Hirsch first coined the concept for the show in an 11-minute low-budget student film which he made at the California Institute of the Arts. Hirsch was called in to do a pitch for Disney Channel for a show based on the short pilot. Disney Channel bought the idea and started airing the series in the summer of 2012. The series was inspired by Hirsch's own childhood experiences with his twin sister during their summer vacations, while Stan was based on his own grandfather of the same name.

On June 14, 2014, it was confirmed that Season 2 would premiere on August 1 and on August 4 of the same year on Disney Channel and Disney XD respectively , with most of the season two episodes airing first on Disney XD, as it is considered the new home for the series. On November 20, 2015, Hirsch announced that the series would finish with its second season, stating that he chose to do it for the show to end with "a real conclusion for the characters". The show culminated with a one-hour finale titled "Weirdmageddon 3: Take Back the Falls", that aired on February 15, 2016.

A 68-hour marathon aired on Disney XD from February 12, 2016, up until the finale on February 15, 2016, with the entire series airing in order. Due to only having 39 episodes before its airing, the show was looped four times to fill the 68-hour slot.

Hirsch has stated he remains open to continuing the series with additional episodes or specials.

For their summer vacation, 12-year-old Dipper Pines and his twin sister Mabel are dropped off from their home in Piedmont, California to the fictitious town of Gravity Falls, Roadkill County, Oregon to live with their Great Uncle Stan Pines (often shortened to Grunkle Stan), who runs a tourist trap called the 'Mystery Shack'. Things are not what they seem in this small town, and with the help of a mysterious journal that Dipper finds in the forest, they begin unraveling the local mysteries. With appearances from Wendy Corduroy, Mystery Shack cashier; Soos Ramirez, friend of Dipper and Mabel and handyman to Grunkle Stan; plus an assortment of other characters, Dipper and Mabel always have an intriguing day to look forward to.

Prior to working on the series, series creator Alex Hirsch's primary inspiration growing up was the popular animated sitcom The Simpsons, where he observed that "animation could be funnier than live-action. That animation didn't have to just be for kids. That it could be satirical and observational and grounded in a sense of character interaction". Hirsch graduated from the California Institute of the Arts, and was hired to work as writer and storyboard artist for the Cartoon Network series The Marvelous Misadventures of Flapjack, where he was paired up with Pendleton Ward, the creator of Adventure Time. Afterwards, he moved on to co-develop the Disney Channel animated series Fish Hooks; shortly before he pitched (and was subsequently green-lit) Gravity Falls. 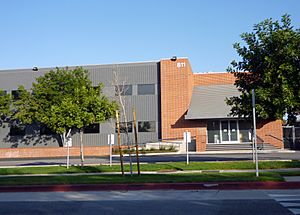 Hirsch explained in an interview with The A.V. Club during production of season 1, that a typical episode is conceived in a room reserved for writers, where a simple synopsis is presented, and from then on dramatic structure is defined, and the plot is modified to include a character-driven subplot, which Hirsch expresses as "the hardest thing ... to find a character story that actually uncovers, explores, or pushes tension—on something our characters care about—that is properly explored via the magic or monster or impossibility of the week."

B- and A-stories are created, and are given to a writer to produce an outline, which is then subsequently checked-off by Hirsch for feedback. The writer produces a draft from these edits, where more notes may be given. Hirsch states that he and creative director Mike Rianda may personally create a draft for themselves before a final script is produced, in which the dialogue from the draft received from the writer is majorly revised; Hirsch states that the revising process "is not a discredit to our writers—it's just we have a very particular vision. In particular, I usually rewrite almost all of Dipper's dialogue and most of Mabel's dialogue, just because I have them in my head. Me and Mike will stay up for about 24 hours prior to the delivery of every script. We'll take the weekend, we'll work all night, we'll drink Red Bull, we'll sleep on the couch in shifts like maniacs, we'll slap each other in the face."

A script is delivered, which then gets translated into a storyboard, where feedback is received from Hirsch to the board artists if a certain element, such as a gag, doesn't work. Afterwards, a pitch for the episode is given to the network, where they do a read-through, and then the episode is either checked out by the network, or retooled in the small amount of time allocated before an animation studio must receive something to work with.

The first twelve episodes of Gravity Falls aired in a regular weekly slot on Disney Channel starting in mid-2012, but subsequent episodes were broadcast without similar regularity; it took until August 2013 to broadcast the remaining eight episodes of the first season. The second season began airing a year later in August 2014, transitioning over to Disney XD, but again without any regularity to when new episodes would be first broadcast. According to Disney XD, as each episode took about six months of work to complete, they opted against stockpiling episodes to show weekly but instead take advantage of the serial nature of the show, broadcasting each episode as it was completed and making an event out of it.

At the end of every episode, there is a ciphered text in one of many substitution ciphers:

Gravity Falls received critical acclaim. Brian Lowry of Variety stated: "The show has a breezy quality that should play to kids, and tickle some twinges of nostalgia among their parents." Los Angeles Times Robert Lloyd referred to the program as "...gently twisted, with some Disneyfied action and heart-warming folded in". In his review, David Hinckley of New York Daily News called Gravity Falls "quirky and endearing", and offered praise for the character of Mabel Pines. Matt Blum, writing for Wired, favorably compared the show to Cartoon Network's animated program Regular Show and Disney Channel's animated program Phineas and Ferb, hailing Gravity Falls as "clever, strange, and somewhat poignant". Erik Kain of Forbes called Gravity Falls "the best thing on TV at the moment". Kayla Cobb of Decider called Gravity Falls "one of the most structurally smart shows ever created".

A special preview of the series following the Disney Channel Original Movie Let It Shine was watched by 3.4 million viewers. The series garnered high views on its fifth episode, which aired on July 13, 2012 and attracted 3.6 million viewers. On March 15, 2013, the episode "The Deep End" was watched by 4.5 million viewers after the premiere of Wizards of Waverly Place's The Wizards Return: Alex vs. Alex, becoming the highest-rated episode of the series. WatchMojo.com ranked Gravity Falls as the third best cartoon of the 2010s.

Later moving on to Disney XD, the episode "A Tale of Two Stans" became the highest-rated telecast ever on Disney XD, with 1.91 million viewers. The series finale "Weirdmageddon 3: Take Back The Falls" beat that record, being watched by 2.47 million viewers in the United States.

All content from Kiddle encyclopedia articles (including the article images and facts) can be freely used under Attribution-ShareAlike license, unless stated otherwise. Cite this article:
Gravity Falls Facts for Kids. Kiddle Encyclopedia.