Jason Morgan Ritter (born February 17, 1980) is an American actor. He is known for his roles as Kevin Girardi in the television series Joan of Arcadia, Ethan Haas in The Class, Sean Walker in the NBC series The Event, and as the voice of Dipper Pines in Gravity Falls. He also played the recurring role of Mark Cyr in the NBC television series Parenthood, for which he received an Emmy Award nomination. As of 2017, he stars in the TV comedy series Kevin (Probably) Saves the World. 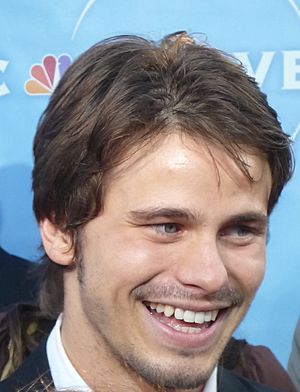 Ritter was born on February 17, 1980 in Los Angeles, California, to actors Nancy Morgan and John Ritter. He is also a grandson of actors Tex Ritter and Dorothy Fay. His stepmother is actress Amy Yasbeck. The actor has three siblings, including actor Tyler Ritter.

Ritter first appeared in the opening credits of his father's show, Three's Company. He was the little blonde haired boy running up to Joyce DeWitt in the petting zoo scene.

He attended middle and high school at the Crossroads School in Santa Monica, California, with Simon Helberg, who became his roommate at NYU. He then attended and graduated from New York University's Tisch School of the Arts, where he studied at the Atlantic Theater Company. He also studied at the Royal Academy of Dramatic Art in London, UK.

All content from Kiddle encyclopedia articles (including the article images and facts) can be freely used under Attribution-ShareAlike license, unless stated otherwise. Cite this article:
Jason Ritter Facts for Kids. Kiddle Encyclopedia.