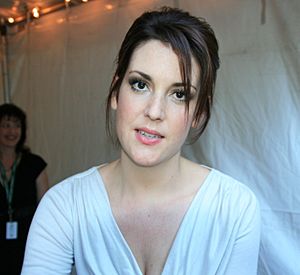 Melanie Jayne Lynskey (born 16 May 1977) is a New Zealand actress who has starred in lots of movies, including Hello I Must be Going, But I'm a Cheerleader and Heavenly Creatures. She was in the sitcom Two and a Half Men and in other television programs. She was born in New Plymouth.

All content from Kiddle encyclopedia articles (including the article images and facts) can be freely used under Attribution-ShareAlike license, unless stated otherwise. Cite this article:
Melanie Lynskey Facts for Kids. Kiddle Encyclopedia.