Stephen Edwin King (born September 21, 1947) is an American writer from Maine. He wrote scary horror novels. His books and stories have sold more than 300 million copies. He has written more than fifty novels, two hundred short stories, and nine collections of short fiction.

King's first novel, Carrie, was published in 1974. Many of his stories have been made into movies or television programs. The movies and programs include The Shining, The Shawshank Redemption, The Green Mile, Misery, Pet Sematary, It (the miniseries) and the 2017 movie It.

King has written some of his books under the name "Richard Bachman". He collaborated with Peter Straub on others.

King's highest rated books (as rated by readers) include Carrie, The Shining, The Stand, Misery, It, Cujo, The Dark Tower, Under the Dome and Rita Hayworth and Shawshank Redemption. 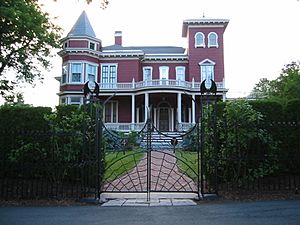 King and his wife Tabitha own three different houses. One house is in Bangor, Maine, one is in Lovell, Maine and one is in Sarasota, Florida. Stephen and Tabitha have three children and three grandchildren.

All content from Kiddle encyclopedia articles (including the article images and facts) can be freely used under Attribution-ShareAlike license, unless stated otherwise. Cite this article:
Stephen King Facts for Kids. Kiddle Encyclopedia.