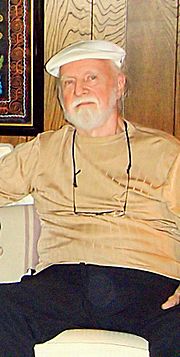 Richard Burton Matheson (February 20, 1926 – June 23, 2013) or Logan Swanson was an American author and screenwriter. He mostly wrote in the fantasy, horror, and science fiction genres. Two of his books are I Am Legend and Bid Time Return. He wrote several television episodes for The Twilight Zone.

Matheson was born on February 20, 1926 in Allendale, New Jersey to a Norwegian family. He was raised in Brooklyn, New York. Matheson studied at Brooklyn Technical High School and at the University of Missouri. He was married to Ruth Ann Woodson from 1952 until his death in 2013. They have four children.

Matheson came up with the idea for I Am Legend after seeing Tod Browning's Dracula.

All content from Kiddle encyclopedia articles (including the article images and facts) can be freely used under Attribution-ShareAlike license, unless stated otherwise. Cite this article:
Richard Matheson Facts for Kids. Kiddle Encyclopedia.