University of Missouri facts for kids 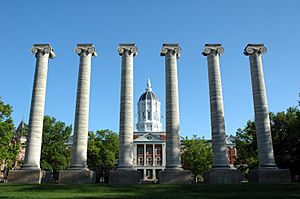 The University of Missouri (often shortened to MU, and also nicknamed Mizzou) is a public university in Columbia, Missouri, in the United States that was started in 1839. It has about 31,000 students.

Missouri's athletics teams are called the Tigers. Missouri has 18 varsity teams that now compete in the Southeastern Conference. The school's mascot, Truman the Tiger, is named after President Harry Truman, who was from Missouri.

There are more than 280 degree programs at the University of Missouri.

The university's well known school of journalism is the oldest university journalism program in the United States. The school has awarded its Honor Medal for Distinguished Service in Journalism. The medal has been awarded yearly since 1930.

All content from Kiddle encyclopedia articles (including the article images and facts) can be freely used under Attribution-ShareAlike license, unless stated otherwise. Cite this article:
University of Missouri Facts for Kids. Kiddle Encyclopedia.