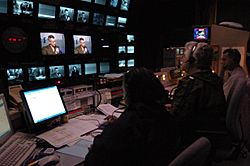 The PBS NewsHour is an American evening television news program that is broadcast seven nights a week on more than 300 PBS stations.

The weekday program is one hour-long. It is co-anchored by Gwen Ifill and Judy Woodruff. They are the only two women leading a national nightly news program on broadcast currentlly. It is produced by WETA-TV. It is the flagship public media station for Washington, D.C.. The PBS NewsHour Weekend is 30 minutes long. It is anchored by Hari Sreenivasan and produced by New York PBS member station WNET. As the nation's first hour-long broadcast of nightly news, the PBS NewsHour is known for its in-depth coverage of issues and current events.

All content from Kiddle encyclopedia articles (including the article images and facts) can be freely used under Attribution-ShareAlike license, unless stated otherwise. Cite this article:
PBS NewsHour Facts for Kids. Kiddle Encyclopedia.