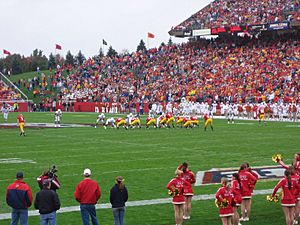 The Big 12 also has 10 "associate members". Nine of these play one sport in the conference, while one other school houses two sports in the Big 12.

Four schools have left the Big 12 since it was formed.

All content from Kiddle encyclopedia articles (including the article images and facts) can be freely used under Attribution-ShareAlike license, unless stated otherwise. Cite this article:
Big 12 Conference Facts for Kids. Kiddle Encyclopedia.