The county and city were both named after one of South Dakota's pioneer promoters, Wilmot Brookings (1830 - 1905). Brookings set out for the Dakota Territory in June 1857. He arrived at Sioux Falls on August 27, 1857, and became one of the first settlers there. He and his group represented the Western Town Company. After a time in Sioux Falls, Brookings and a companion set out for the Yankton area to locate a town in an area that was soon to be ceded by the Native Americans. This trip was begun in January 1858, and the two soon encountered a blizzard that froze Brookings' feet which both had to be amputated. 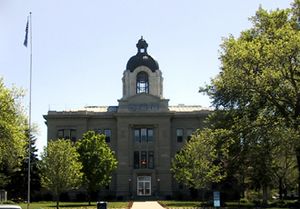 He rose to a high position in the Territory, once being a member of the Squatter Territorial Legislature and later being elected Squatter Governor. Brookings then became appointed superintendent of a road that was to be built from the Minnesota state line west to the Missouri River about 30 miles north of Ft. Pierre. It was during the construction of this road that Brookings came into contact with land that was part of this county at the time. Because of his drive to settle the Dakota Territory, Brookings County and city were named for a spirited pioneer promoter. Wilmot W. Brookings made settlement of this area a real possibility for many people.

The first real town that was organized in Brookings County was Medary in 1857. Up to this point, the area had been traveled and utilized by only Native Americans, with a few indistinct traces left showing the penetration of the area by explorers, missionaries, trappers, and traders. Along with Sioux Falls and Flandreau, Medary was one of the first three European settlements to be established in South Dakota.

The first actual site of Medary was located by the Dakota Land Company out of Minnesota which was led by Alpheus G. Fuller and Major Franklin J. DeWitt and accompanied by engineer Samuel A. Medary, Jr. In 1857, the men put up quarters in preparation to live out the winter in Medary. Many other settlers moved into the area in 1858. But in the spring of that year, a large group of Yankton and Yanktonnia Indians drove the settlers from the area, and Medary remained nearly abandoned for the next 11 years.

In 1869, a group of 10 Norwegian pioneers moved west into the Dakota Territory and resettled the area of Medary, which was located about four and one half miles south of present-day Brookings. The county of Brookings was formally organized in Medary in the cabin of Martin Trygstad on July 3, 1871. The original boundaries of the county extended to two miles south of Flandreau, until the territorial legislature relocated the boundaries of the county to the current location on January 8, 1873. Two other small settlements, Oakwood and Fountain, appeared in the Brookings County area around this time. All three settlements hoped that they would be the lucky town by which the railroad would decide to lay tracks through as it moved westward but it didn't go through Medary so it became a ghost town.

As it turned out, none of the three towns were chosen to be passed through by the railroad. When the businessmen of Medary and Fountain found out that the railroad had no plans of laying tracks through the two towns, they began a push to find a central location. In a sense, their attitude was 'if you can't beat 'em, join 'em!' Many private meetings and much effort on the part of the men of Medary and Fountain led to the railroad deciding to lay its tracks through what would become the city of Brookings.

In a letter sent to Chicago on September 30, 1879, Land Commissioner Charles E. Simmons communicated the layout of the series of towns in Brookings County to be passed through by the railroad. These towns were to be Aurora, Brookings, and Volga. Many merchants of Medary and Fountain packed up their businesses and belongings and moved to Brookings, which was surveyed and platted on October 3 and 4, 1879. Fountain ceased to exist after this turn of events, while Medary and Oakwood continued to exist for a while but eventually faded away. A monument still stands at the site of the old Medary as a reminder of the people who once lived there.

The railroad crossed the Minnesota state line and into Brookings County on October 2, 1879. With tracks being built at about one mile per day, the track and first train reached Brookings' Main Street on October 18, 1879. The railroad station was opened a month later.

According to the City's 2013 Comprehensive Annual Financial Report, the largest employers in the city are:

The unemployment rate in Brookings is 3.2 percent, with a projected eight-year job growth of 23.31 percent.

Bel Brands USA, Inc., a subsidiary of Paris-based multinational Fromageries BEL or Bel Group, began commercial construction of a 170,000-square-foot Babybel cheese production plant in July 2014 in the city's Foster Addition north of the Swiftel Center. The project added 250 new jobs in Brookings by the end of 2014.

There were 8,159 households of which 23.2% had children under the age of 18 living with them, 37.5% were married couples living together, 6.5% had a female householder with no husband present, 3.0% had a male householder with no wife present, and 53.0% were non-families. 32.6% of all households were made up of individuals and 7.8% had someone living alone who was 65 years of age or older. The average household size was 2.29 and the average family size was 2.93.

The two largest ancestries in the city are:

As of 2010, 60.7% of the Brookings population claim an affiliation with a religious congregation. The largest such groups were:

Brookings is served by Interstate 29 (north-south) and U.S. Route 14 (east-west).

Brookings Regional Airport serves the City of Brookings. A major reconstruction project of the airport is scheduled to begin in summer 2012.

The City of Brookings owns nearly all city services and utilities including:

On October 7, 2005, Brookings was featured on the reality-TV show Three Wishes. 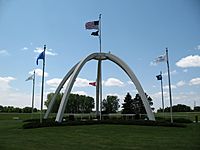 The veterans memorial in Brookings.

Brookings is the hometown of the main character in Netflix's series Love, Gus Cruikshank.

Brookings is the hometown of Charles Percy in the ABC medical drama, Grey's Anatomy.

All content from Kiddle encyclopedia articles (including the article images and facts) can be freely used under Attribution-ShareAlike license, unless stated otherwise. Cite this article:
Brookings, South Dakota Facts for Kids. Kiddle Encyclopedia.