Davis is a city in the U.S. state of California and the most populous city in Yolo County. It had a population of 65,622 in 2010, not including the on-campus population of the University of California, Davis, which was 32,153 in 2009. The city is a suburb of California's capital, Sacramento.

Davis grew into a Southern Pacific Railroad depot built in 1868. It was then known as "Davisville", named after Jerome C. Davis, a prominent local farmer. However, the post office at Davisville shortened the town name simply to "Davis" in 1907. The name stuck, and the city of Davis was incorporated on March 28, 1917.

From its inception as a farming community, Davis has been known for its contributions to agricultural policy along with veterinary care and animal husbandry. Following the passage of the University Farm Bill in 1905 by the California State Legislature, Governor George Pardee selected Davis out of 50 other sites as the future home to the University of California's University Farm, officially opening to students in 1908. The farm, later renamed the Northern Branch of the College of Agriculture in 1922, was upgraded into the seventh UC general campus, the University of California, Davis, in 1959.

Davis lies in the Sacramento Valley, the northern portion of the Central San Joaquin Valley, in Northern California, at an elevation of about 16 m (52 ft) above sea level.

The topography is flat, which has helped Davis to become known as a haven for bicyclists.

The Davis climate resembles that of nearby Sacramento and is typical of California's Central Valley Mediterranean climate regime: dry, hot summers and cool, rainy, winters. It is classified as a Köppen Csa climate. Average temperatures range from 46 °F (8 °C) in December and January to 75 °F (24 °C) in July and August. Thick ground fog called tule fog settles into Davis during late fall and winter. This fog can be dense with visibility to nearly zero. As in other areas of northern California, the tule fog is a leading cause of road accidents in the winter season. 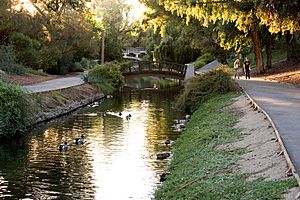 Part of the UC Davis Arboretum

The University of California, Davis is located south of Russell Boulevard and west of A Street and then south of 1st Street. The land occupied by the university is not incorporated within the boundaries of the city of Davis and lies within both Yolo and Solano Counties.

Local energy planning began in Davis after the energy crisis of 1973. A new building code promoted energy efficiency. Energy use in buildings decreased dramatically and in 1981 Davis citizens won a $100, 000 prize from utility PG&E, for cutting electricity use during the summer peak.

On November 14, 1984, the Davis City Council declared the city to be a nuclear-free zone. In 1998, the City passed a 'Dark Skies' ordinance in an effort to reduce light pollution in the night sky.

Davis is part of the Sacramento–Arden-Arcade–Roseville Metropolitan Statistical Area.

In 2006, Davis was ranked as the second most educated city (in terms of the percentage of residents with graduate degrees) in the US by CNN Money Magazine, after Arlington, Virginia.

There were 22,948 households of which 26.4% had children under the age of 18 living with them, 38.3% were married couples living together, 8.2% had a female householder with no husband present, and 50.8% were non-families. 25.0% of all households were composed of individuals and 5.2% had someone living alone who was 65 years of age or older. The average household size was 2.50 and the average family size was 3.00.

This city of approximately 62,000 people abuts a university campus of 32,000 students. Although the university's land is not incorporated within the city, many students live off-campus in the city.

A continuous stream of bands, speakers and various workshops occurs throughout Mother's Day weekend on each of Whole Earth Festival's (WEF) three stages and other specialty areas. The WEF is organized entirely by UC Davis students, in association with the Associated Students of UC Davis, the Experimental College, and the university.

Celebrate Davis is the annual free festival held by the Davis Chamber of Commerce. It features booths by Davis businesses, live music, food vendors, live animals, activities like rock climbing and zip-line. It concludes with fireworks after dark. Parking is problematic, so most people ride their bikes and use the free valet parking.

Picnic Day is an annual event at the University of California, Davis and is always held on the third Saturday in April. It is the largest student-run event in the US. Picnic Day starts off with a parade, which features the UC Davis California Aggie Marching Band-uh!, and runs through campus and around downtown Davis and ends with the Battle of the Bands, which lasts until the last band stops playing (sometimes until 2 am). There are over 150 free events and over 50,000 attend every year. Other highlights include: the Dachshund races, a.k.a. the Doxie Derby, held in the Pavilion; the Davis Rock Challenge, the Chemistry Magic Show, and the sheep dog trials. Many departments have exhibits and demonstrations, such as the Cole Facility, which until recently showed a fistulated cow (a cow that has been fitted with a plastic portal (a "fistula") into its digestive system to observe digestion processes). Its name was "Hole-y Cow".

The Davis Transmedia Art Walk is a free, self-guided, public art tour includes 23 public murals, 16 sculptures, and 15 galleries and museums all in downtown Davis and the University of Davis campus. A free Davis Art Walk map serves as a detailed guide to the entire collection. The art pieces are all within walking distance of each other. The walk is a roughly circuitous path that can be completed within an hour or two. Every piece of art on the Art Walk has been embedded with an RFID chip. Using a cellphone that supports this technology, you access multimedia files that relate to each work. You can even leave a comment or "burn your own message" for other visitors to see. Artist hosted tours are held on the weekend by appointment only. To pick up a copy of the Davis Art Walk map, visit the Yolo County Visitors Bureau (132 E St., Suite 200; (530) 2978-1900) or the John Natsoulas Center for the Arts (521 1st St.; (530) 756-3938).

The Mondavi Center, located on the UC Davis campus, is one of the biggest non-seasonal attractions to Davis. The Mondavi Center is a theater which hosts many world-class touring acts, including star performers such as Yo-Yo Ma and Cecilia Bartoli, and draws a large audience from Sacramento.

The UC Davis Arboretum is an arboretum and botanical garden. Plants from all over the world grow in different sections of the park. There are notable oak and native plant collections and a small redwood grove. A small waterway spans the arboretum along the bed of the old North Fork of Putah Creek. Occasionally herons, kingfishers, and cormorants can be seen around the waterways, as well as the ever-present ducks. Tours of the arboretum led by volunteer naturalists are often held for grade-school children.

The Domes, (AKA Baggins End Innovative Housing), is an on-campus cooperative housing community designed by project manager Ron Swenson and future student-residents in 1972. Consisting of 14 polyurethane foam-insulated fiberglass domes and located in the Sustainable Research Area at the western end of Orchard Road, it is governed by its 26 UCD student residents. It is one of the few student co-housing cooperative communities in the USA, and is an early example of the modern-day growing tiny house movement. The community has successfully resisted several threats to its continuation over the years.

The Davis Farmers Market is held every Wednesday evening and Saturday morning. Participants sell a range of fruits and vegetables, baked goods, dairy and meat products (often from certified organic farms), crafts, and plants and flowers. From April to October, the market hosts Picnic in the Park, with musical events and food sold from restaurant stands. The Davis Farmers Market won first place in the 2009, and second place in the 2010 America's Favorite Farmers Markets held by the American Farmland Trust under the large Farmers market classification.

Davis has one daily newspaper, The Davis Enterprise, founded in 1897. UC Davis also has a weekly newspaper called The California Aggie which covers campus, local and national news. Davis Media Access, a community media center, is the umbrella organization of television station DCTV. There are also numerous commercial stations broadcasting from nearby Sacramento. Davis has two community radio stations: KDVS 90.3 FM, on the University of California campus, and KDRT 95.7 FM, a subsidiary of Davis Media Access and one of the first low-power FM radio stations in the United States. Davis has the world's largest English-language local wiki, DavisWiki. 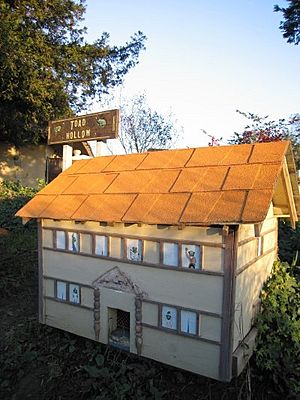 Entrance to the Toad Tunnel in front of the Post Office

Davis' Toad Tunnel is a wildlife crossing that was constructed in 1995 and has drawn much attention over the years, including a mention on The Daily Show. Because of the building of an overpass, animal lovers worried about toads being killed by cars commuting from South Davis to North Davis, since the toads hopped from one side of a dirt lot (which the overpass replaced) to the reservoir at the other end. After much controversy, a decision was made to build a toad tunnel, which runs beneath the Pole Line Road overpass which crosses Interstate 80. The project cost $14,000. The tunnel is 21 inches (53 cm) wide and 18 inches (46 cm) high.

The tunnel has created problems of its own. The toads originally refused to use the tunnel and so the tunnel was lit to encourage its use. The toads then died from the heat of the lamps inside the tunnel. Once through the tunnel, the toads also had to contend with birds who grew wise to the toad-producing hole in the ground. The exit to the toad tunnel has been decorated by the Postmaster to resemble a toad town.

All content from Kiddle encyclopedia articles (including the article images and facts) can be freely used under Attribution-ShareAlike license, unless stated otherwise. Cite this article:
Davis, California Facts for Kids. Kiddle Encyclopedia.