Kingfishers or Alcedinidae are a family of small to medium-sized, brightly colored birds in the order Coraciiformes. They have a cosmopolitan distribution, with most species found in the tropical regions of Africa, Asia, and Oceania. The family contains 114 species and is divided into three subfamilies and 19 genera. All kingfishers have large heads, long, sharp, pointed bills, short legs, and stubby tails. Most species have bright plumage with only small differences between the males and females.

Most species are tropical in distribution, and a slight majority are found only in forests. They consume a wide range of prey usually caught by swooping down from a perch. While kingfishers are usually thought to live near rivers and eat fish, many species live away from water and eat small invertebrates. They nest in cavities, usually tunnels dug into the natural or artificial banks in the ground. Some kingfishers nest in termite nests. A few species are threatened with extinction. 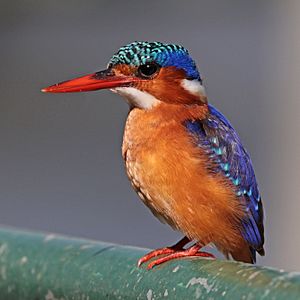 The plumage of most kingfishers is bright, with green and blue being the most common colours. The brightness of the colours is neither the product of iridescence (except in the American kingfishers) or pigments, but is instead caused by the structure of the feathers, which causes scattering of blue light (the Tyndall effect). 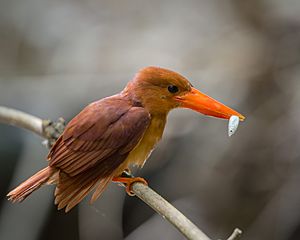 The kingfishers have long, dagger-like bills. The bill is usually longer and more compressed in species that hunt fish, and shorter and more broad in species that hunt prey off the ground. The largest bill is that of the shovel-billed kookaburra, which is used to dig through the forest floor in search of prey. They generally have short legs and species have four toes, three of which are forward-pointing.

The irises of most species are dark brown. The kingfishers have excellent vision; they are capable of binocular (allowing good perception of depth) vision and are thought in particular to have good colour vision. They have restricted movement of their eyes within the eye sockets, instead using head movements to track prey. In addition, they are capable of compensating for the refraction of water and reflection when hunting prey underwater, and are able to judge depth under water accurately. They also have membranes that cover the eyes to protect them when they hit the water. 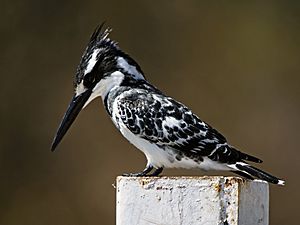 The kingfishers have a wide and varied distribution, occurring throughout the world's tropical and temperate regions. They are absent from the polar regions and some of the world's driest deserts. A number of species have reached islands groups, particularly those in the south and east Pacific Ocean. The Old World tropics and Australasia are the core areas for this group. 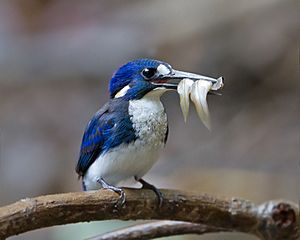 Individual species may have massive ranges, like the common kingfisher, which ranges from Ireland across Europe, North Africa, and Asia as far as the Solomon Islands in Australasia, or the pied kingfisher, which has a widespread distribution across Africa and Asia. Other species have much smaller ranges, the Kofiau paradise kingfisher is restricted to the island of Kofiau off New Guinea.

Kingfishers occupy a wide range of habitats. While they are often associated with rivers and lakes, over half the world's species are found in forests and forested streams. They also occupy a wide range of other habitats. The red-backed kingfisher of Australia lives in the driest deserts, although kingfishers are absent from other dry deserts like the Sahara. Other species live high in mountains, or in open woodland, and a number of species live on tropical coral atolls.

Numerous species have adapted to human-modified habitats, particularly those adapted to woodlands, and may be found in cultivated and agricultural areas, as well as parks and gardens in towns and cities. 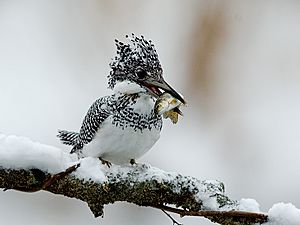 Kingfishers feed on a wide variety of prey. They are most famous for hunting and eating fish, and some species do specialise in catching fish, but other species take crustaceans, frogs and other amphibians, annelid worms, molluscs, insects, spiders, centipedes, reptiles (including snakes), and even birds and mammals. Individual species may specialise in a few items or take a wide variety of prey, and for species with large global distributions, different populations may have different diets.

Woodland and forest kingfishers take mainly insects, particularly grasshoppers, whereas the water kingfishers are more specialised in taking fish. The red-backed kingfisher has been observed hammering into the mud nests of fairy martins to feed on their nestlings. Kingfishers usually hunt from an exposed perch; when a prey item is observed, the kingfisher swoops down to snatch it, then returns to the perch. 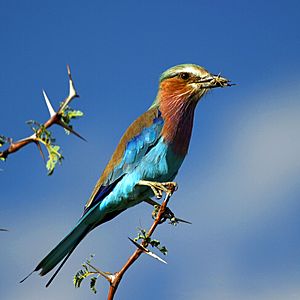 Kingfishers are territorial, some species defending their territories vigorously. Kingfishers are cavity nesters, with most species nesting in holes dug in the ground. These holes are usually in earth banks on the sides of rivers, lakes or man-made ditches. Some species may nest in holes in trees, the earth clinging to the roots of an uprooted tree, or nests of termites (termitarium). These termite nests are common in forest species. The nests take the form of a small chamber at the end of a tunnel. Nest-digging duties are shared.

The eggs of kingfishers are invariably white and glossy. The typical clutch size varies by species; some of the very large and very small species lay as few as two eggs per clutch, whereas others may lay 10 eggs, the typical is around three to six eggs. Both the male and female incubate the eggs. The offspring of the kingfisher usually stay with the parents for 3–4 months. 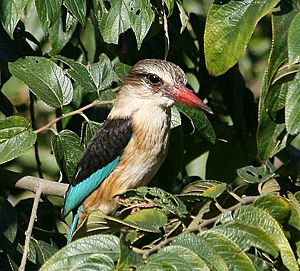 A number of species are considered threatened by human activities and are in danger of extinction. The majority of these are forest species with limited distribution. They are threatened by habitat loss caused by forest clearance or degradation and in some cases by introduced species. The Marquesan kingfisher of French Polynesia is listed as critically endangered due to a combination of habitat loss and degradation caused by introduced cattle, and possibly due to predatory species that have been introduced.

Kingfishers are generally shy birds, but in spite of this, they feature heavily in human culture, generally due to the large head supporting its powerful mouth, their bright plumage, or some species' interesting behavior.

For the Dusun people of Borneo, the Oriental dwarf kingfisher is considered a bad omen, and warriors who see one on the way to battle should return home. Another Bornean tribe considers the banded kingfisher an omen bird, albeit generally a good omen. The sacred kingfisher, along with other Pacific kingfishers, was respected by the Polynesians, who believed it had control over the seas and waves.

All content from Kiddle encyclopedia articles (including the article images and facts) can be freely used under Attribution-ShareAlike license, unless stated otherwise. Cite this article:
Kingfisher Facts for Kids. Kiddle Encyclopedia.