Kookaburras are terrestrial tree kingfishers of the genus Dacelo native to Australia and New Guinea, which grow to between 28–42 cm (11–17 in) in length. The name is a loanword from Wiradjuri guuguubarra.

The loud distinctive call of the laughing kookaburra is widely used as a stock sound effect in situations that involve an Australian bush setting or tropical jungle, especially in older movies.

They are found in habitats ranging from humid forest to arid savanna, as well as in suburban areas with tall trees or near running water. Even though they belong to the larger group known as "kingfishers", kookaburras are not closely associated with water. 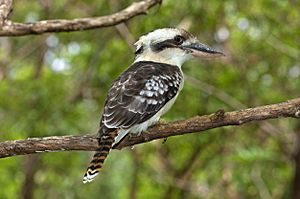 Kookaburras are almost exclusively carnivorous, eating mice, snakes, insects, small reptiles, and the young of other birds; unlike many other kingfishers, they rarely eat fish, although they have been known to take goldfish from garden ponds. In zoos they are usually fed food for birds of prey.

The most social birds will accept handouts and will take meat from barbecues. It is generally not advised to feed kookaburras ground beef or pet food, as these do not include enough calcium and roughage.

Illustration of a Kookaburra 1914

They are territorial. They often sing as a chorus to mark their territory.

The distinctive sound of the laughing kookaburra's call, which sounds like echoing human laughter, is widely used in filmmaking and television productions, as well as certain Disney theme park attractions, regardless of African, Asian and South American jungle settings.

Olly the Kookaburra was one of the three mascots chosen for the 2000 Summer Olympics in Sydney. The other mascots were Millie the Echidna and Syd the Platypus.

The children's television series Splatalot! includes an Australian character called "Kookaburra" (or "Kook"), whose costume includes decorative wings that recall the bird's plumage, and who is noted for his distinctive high-pitched laugh.

An Australian coin known as the Silver Kookaburra minted annually since 1990.

The call of a kookaburra nicknamed "Jacko" was for many years used as the morning opening theme by ABC radio stations, and for Radio Australia's overseas broadcasts. This was the basis for a book for children.

"Kookaburra sits in the old gum tree" is a well-known children's song written in 1932 by Marion Sinclair. 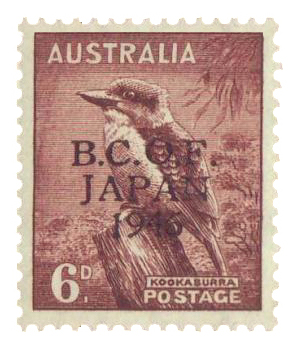 All content from Kiddle encyclopedia articles (including the article images and facts) can be freely used under Attribution-ShareAlike license, unless stated otherwise. Cite this article:
Kookaburra Facts for Kids. Kiddle Encyclopedia.