The Walt Disney Company, commonly nicknamed Disney, is one of the largest entertainment and media companies in the world. This studio is famous for their family movies. It was started in 1923 by Walt Disney and his brother, Roy Oliver Disney, as the Disney Brothers Cartoon Studio. It had the name of Walt Disney Productions from 1937 to 1985.

Disney Enterprises Inc. is a subsidiary of the company; the name is found in many of its franchises.

The current chairman and CEO is Bob Chapek since 2020.

This unit, also called the Walt Disney Studios, is headed by Chairman Dick Cook. It consists of:

One of the Studios' largest assets lies in Walt Disney Feature Animation, which has made a successful string of animated movies for almost seven decades. Because of failures with most of their recent additions, it has changed its focus from traditional hand-drawn to CGI movies. Pixar, also owned by Disney, is one of the first studios to create CGI movies. Recently, Disney has acquired 20th Century Fox, Fox Searchlight Pictures and Blue Sky Studios, a big movie production studio, as well as other assets of 21st Century Fox, for $52 billion USD.

Worldwide, Disney has eleven theme parks (as of January 2022):

Disney once owned the sports teams, the Angels (baseball) and the Mighty Ducks (ice hockey), both based in Anaheim, California. They are now the property of other people.

The ABC television network, which Disney bought in 1996, serves as the centre of this unit. Cable television channels within it include Disney Channel, Toon Disney, ABC Family, ESPN and SOAPnet.It also partly owns Lifetime, A&E and E!.

Buena Vista Television, responsible for the syndication of many Disney series, produces some of its own as well: Who Wants to Be a Millionaire, Live with Regis and Kelly, and Ebert & Roeper.

Merchandising and licensing within the company are overseen in this division. Disney Publishing Worldwide, part of this unit, has Disney Press, Disney Editions and Hyperion Books as its brands.

It once owned the Disney Store shopping chain until 2004. Jim Henson's Muppets have taken its place since then. 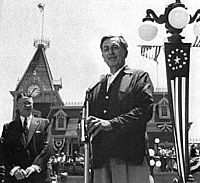 Walt Disney at the grand opening of Disneyland, July 1955.

All content from Kiddle encyclopedia articles (including the article images and facts) can be freely used under Attribution-ShareAlike license, unless stated otherwise. Cite this article:
The Walt Disney Company Facts for Kids. Kiddle Encyclopedia.