The Reedy Creek Improvement District (RCID) is the governing jurisdiction and special taxing district for the land of Walt Disney World Resort. It includes 39.06 sq mi (101.2 km2) within the outer limits of Orange and Osceola counties in Florida. It acts with the same authority and responsibility as a county government. It includes the cities of Bay Lake and Lake Buena Vista, and unincorporated RCID land.

The district was created in 1967 after the Florida Government passed the Reedy Creek Improvement Act. The law was pushed for by Walt Disney and his namesake media company both before and after Walt's death in 1966, during the planning stages of Walt Disney World.

Because of incidents that occurred over many years, the district has been criticized for acting in the interests of Disney instead of the public. The district has the authority of a governmental body, but is not subjected to the constraints of a governmental body. A major selling point in lobbying the Florida Government to establish the district was Walt's proposal of the "Experimental Prototype Community of Tomorrow" (EPCOT), a real planned community intended to serve as a testbed for new city-living innovations. The company however eventually decided to abandon Walt's concepts for the experimental city, primarily only building a resort similar to its other Disney parks.

In April 2022, the Florida Legislature passed a law abolishing the RCID. Some members of the Florida Legislature as well as political commentators claimed the action was retaliation stemming from Disney's opposition to the controversial Parental Rights in Education Act, commonly known as the "Don’t Say Gay” bill by its critics. The law takes effect in June 2023, at which time the RCID would be dissolved; however, it is unclear what will happen to the $1 billion in bond liabilities held by the RCID.

After the success of Disneyland in California, Walt Disney began planning a second park on the East Coast. Disney disliked the businesses that had sprung up around Disneyland, and therefore wanted control of a much larger area of land for the new project. He flew over the Orlando-area site, as well as many other potential sites, in November 1963. Seeing the well-developed network of roads, including the planned Interstate 4 and Florida's Turnpike, with McCoy Air Force Base (later Orlando International Airport) to the east, Disney selected a centrally located site near Bay Lake. Disney used multiple shell companies to buy up land at very low prices from unknowing landowners in the area that would eventually become the district. These company names are listed on the upper story windows of what is now the Main Street USA section of Walt Disney World, including Compass East Corporation; Latin-American Development and Management Corporation; Ayefour Corporation (named because of nearby I-4); Tomahawk Properties, Incorporated; Reedy Creek Ranch, Incorporated; and Bay Lake Properties, Incorporated. 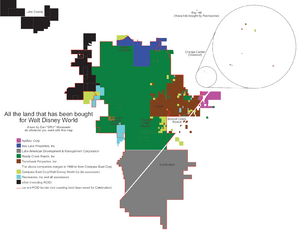 On March 11, 1966, these landowners, all fully owned subsidiaries of what is now The Walt Disney Company, petitioned the Circuit Court of the Ninth Judicial Circuit, which served Orange County, Florida, for the creation of the Reedy Creek Drainage District under Chapter 298 of the Florida Statutes. After a period during which some minor landowners within the boundaries opted out, the Drainage District was incorporated on May 13, 1966, as a public corporation. Among the powers of a Drainage District were the power to condemn and acquire property outside its boundaries "for the public use". It used this power at least once to obtain land for Canal C-1 (Bonnet Creek) through land that is now being developed as the Bonnet Creek Resort, a non-Disney resort.

However, Walt Disney knew that his plans for the land would be easier to carry out with more independence. Among his ideas for his Florida project was his proposed EPCOT, the Experimental Prototype Community of Tomorrow, which was to be a futuristic planned city (and which was also known as Progress City)

According to a press conference held in Winter Park, Florida, on February 2, 1967, by Disney Vice President Donn Tatum, the Improvement District and Cities were created to serve "the needs of those residing there", and the company needed its own government to "clarify the District's authority to [provide services] within the District's limits" and because of the public nature of the planned development. The original city boundaries did not cover the whole Improvement District; they may have been intended as the areas where communities would be built for people to live.

In addition, the Disney-controlled town of Celebration, Florida, which was built with many of Walt Disney's original ideas, which had evolved into a form of New Urbanism, was deannexed from Bay Lake and the District to keep its residents from having power over Disney by providing for separate administration of the areas. Celebration lies on unincorporated land within Osceola County, with a thin strip of still-incorporated land separating it from the rest of the county. This strip of land contains canals and other land used by the District.

The law creating the Improvement District was held by the Supreme Court of Florida not to "violate any provision of the Constitution of Florida." As it, in part, declares that the District is exempt from all state land use regulation laws "now or hereafter enacted," the Attorney General of Florida has issued an opinion stating that this includes state requirements for developments of regional impact.

After Walt Disney died in 1966, the Disney Company board decided that it did not want to be in the business of running a city, and abandoned many of his ideas for Progress City. The planned residential areas were never built. Most notably, Richard Foglesong argues in his book, Married to the Mouse: Walt Disney World and Orlando, that Disney has abused its powers by remaining in complete control of the District.

In January 1990, RCID was granted a $57-million allocation of tax-free state bonds over an agency with plans for a low-income housing development and all additional government applicants in a 6 county region as state distributes the bond proceeds on a first-come order. Disney was criticized for the move with a Republican gubernatorial candidate filed a lawsuit to stop the RCID from using the funds. Also, one legislator moved that would limit the RCID ability to apply to the program and other talk about stripping Disney of the RCID.

Reedy Creek is a natural waterway, the course of which runs mostly through undeveloped territory east of Haines City.

All content from Kiddle encyclopedia articles (including the article images and facts) can be freely used under Attribution-ShareAlike license, unless stated otherwise. Cite this article:
Reedy Creek Improvement District Facts for Kids. Kiddle Encyclopedia.