Orange County is located in the central portion of the U.S. state of Florida. As of the 2010 census, the population was 1,145,956, making it Florida's fifth most populous county. The county seat is Orlando. Orange County is the central county of the Orlando-Kissimmee-Sanford, Florida Metropolitan Statistical Area.

The land that is Orange County was part of the first land to emerge from below the Early Oligocene sea 33.9–28.4 million years ago and is known as Orange Island. Orange County's Rock Spring location is a Pleistocene fossil bearing area and has yielded a vast variety of birds and mammals including giant sloth, mammoth, camel, and the dire wolf dating around 1.1 million years ago.

In 1821, two counties formed Florida: Escambia to the west and St. Johns to the east. In 1824, the area to the south of St. Johns County became Mosquito County, and Enterprise was named the county seat. This massive county took up much of central Florida. Mosquito County was renamed Orange County in 1845 when Florida became a state. Several counties, such as Osceola, Seminole, Lake, and Volusia were carved out of Orange County.

Orange County was renamed from Mosquito County for the fruit that constituted the county's main product. At its peak in the early 1970s, some 80,000 acres (320 km2) were planted in citrus in Orange County.

The financial setbacks, not the first in the grove region's history, were too challenging for many growers. Economically destroyed, many walked away from the land and its obligations. Others awaited other opportunities. One of the region's major land owners and growers was the Tropicana company. They, however, also withdrew rather than try to come back from these seemingly endless generational decimation. With no realistic avenues for agricultural use of this rural land, and Florida's continuing strong population growth and its attendant needs (aided and supported by the success of nearby Walt Disney World and Universal Studios Florida), these areas began and continue to be swallowed up by growing housing developments. However, several packing facilities and wholesalers are still in Orange County. 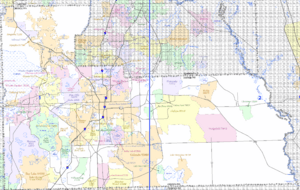 The 2010 U.S. Census reported the following ethnic and racial statistics:

In 2010, 5.9% of the population considered themselves to be of only "American" ancestry (regardless of race or ethnicity.)

The Orange County Public Schools deliver public education to students countywide. Its functions and expenditures are overseen by an elected school board composed of a chairman, elected at-large; and seven members, elected from single-member districts. Each member is elected to a four-year term: the chairman and three other members are elected in gubernatorial election years, while the other four are elected in presidential election years. The school system operates 182 schools (123 elementary, 3 K-8, 35 middle, 19 high, and 4 exceptional learning). In October 2012, the district had 183,562 students, making it the fourth-largest school district statewide and eleventh in the nation.

The University of Central Florida is the sole 4-year public university. As of the Fall 2020 semester, a total of 71,948 students attended the university, making it the largest university in the nation by enrollment. The university's 1,415 acre main campus is situated in northeast Orange County.

Nearby Winter Park is home to Rollins College, a private college situated only a few miles from Downtown Orlando. In 2012, it was ranked #1 by U.S. News & World Report amongst regional universities in the South.

The law schools for Barry University and Florida A&M are also conveniently located in Downtown Orlando.

Full Sail University is a for-profit university in Winter Park, Florida. Full Sail is not regionally accredited, but is nationally accredited by the Accrediting Commission of Career Schools and Colleges (ACCSC) to award associate's, bachelor's degrees, and master's degrees in audio, film, design, computer animation, business, and other fields.[10] The school offers 35 degree programs and 2 graduate certificates and has a student population of more than 16,800.

All content from Kiddle encyclopedia articles (including the article images and facts) can be freely used under Attribution-ShareAlike license, unless stated otherwise. Cite this article:
Orange County, Florida Facts for Kids. Kiddle Encyclopedia.