Christmas is a census-designated place and an unincorporated area in Orange County, Florida, United States. It is part of the Orlando–Kissimmee Metropolitan Statistical Area.

The population was 1,146 at the 2010 census. Christmas is home to the world's largest alligator-shaped building, measuring at just over 200 feet (61 m); to Fort Christmas Historical Park, a recreation of the Second Seminole War Fort Christmas; and to Fort Christmas Folk School, a nonprofit school dedicated to teaching folk arts. Every year, Christmas sends a large amount of mail from its post office from people who mail letters from the town so they can have the "Christmas" postmark on their holiday mailings.

Christmas is the birthplace of the American sculptor James Hughlette "Tex" Wheeler, who is best known for his bronze sculpture of the famed racehorse Seabiscuit which holds a place of honor at Santa Anita Park racetrack in California and his "tribute to the American folk humorist, Will Rogers at Claremore, Oklahoma". Wheeler is buried in the Fort Christmas Cemetery. 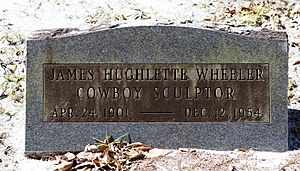 American Sculptor James Hughlette "Tex" Wheeler's Headstone, located in the Fort Christmas Cemetery in Christmas, Florida. Mr. Wheeler is best known for his sculptures of the famed racehorse Seabiscuit and the jockey who rode him to fame, George Woolf at Santa Anita Park in California as well as a statue of Will Rogers at the Will rogers Memorial in Claremore, Oklahoma.

On December 25, 1837, a force of 2,000 U.S. Army soldiers and Alabama Volunteers arrived in the area to construct a fort, which they named Fort Christmas. The fort was one of over 200 forts built during the Second Seminole War.

Christmas is one of the many settings in John Green's 2008 novel Paper Towns. In the book, three Orlando high school students embark on a journey to find their friend, who has recently gone missing. An old abandoned mini-mall in Christmas is one of the places where they search for her and find clues vital to her case.

The median income for a household in the Christmas CDP was not available for the 2010 Census.

All content from Kiddle encyclopedia articles (including the article images and facts) can be freely used under Attribution-ShareAlike license, unless stated otherwise. Cite this article:
Christmas, Florida Facts for Kids. Kiddle Encyclopedia.