Apopka is a city in Orange County, Florida. The city's population was 41,542 at the 2010 census, up from 26,969 at the 2000 U.S. Census. It is part of the Orlando–Kissimmee–Sanford Metropolitan Statistical Area. Apopka comes from Seminole word Ahapopka for "Potato eating place". Apopka is often referred to as the "Indoor Foliage Capital of the World" due to the extensive Greenhouse nurseries there.

The earliest known inhabitants of the Apopka area were the Acuera people, members of the Timucua confederation. They had disappeared by 1730, probably decimated by diseases brought to Florida by Spanish colonists.

The Acuera were succeeded by refugees from Alabama and Georgia, who formed the new Seminole Indian tribe. They called the area Ahapopka. Aha, meaning "Potato," and papka, meaning "eating place".[1] By the 1830s, this settlement numbered about 200, and was the birthplace of the chief Coacoochee (known in English as "Wild Cat").

At the conclusion of the Second Seminole War, the U.S. Congress passed the Armed Occupation Act of 1842, forcing surviving natives at Ahapopka to abandon their village and seek refuge deeper in the wilderness of the Florida peninsula.

The early American settlers built a major trading center on the foundations of the earlier Indian settlement. Their population was large enough by 1857 to support the establishment of a Masonic lodge. In 1859 the lodge erected a permanent meeting place at what is now the intersection of Main Street (U.S. Highway 441) and Alabama Avenue. 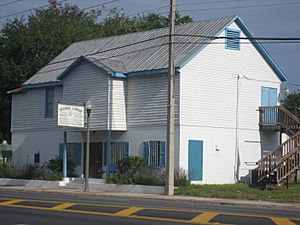 This is the 1859 historic building, The Lodge, that became the central point of the 1 mile square formation of the City of Apopka.

The settlers in the vicinity of "The Lodge" were largely isolated during the Civil War, but the area rebounded once peace was re-established, and a population boom followed the construction of railroad lines through the region.

In 1882 the one square mile surrounding "The Lodge" was officially incorporated under the name "Apopka".

In 1905, the Apopka City Council authorized incorporation of the Apopka Water, Light, and Ice Company. Councilman A.M. Starbird was appointed its manager, but it was not until voters approved a $9,000 bond in 1914 that he was able to contract with International Harvester Corporation to construct a power plant, so electricity was not available in the city until February 10, 1915. This independent utility company was one of many that were gobbled up by the Florida Public Service Corporation in the 1920s. They continued to manage the city's utility needs until the 1940s, when they sold off its ice plants to the Atlantic Company, its electric service to Florida Power Corporation, and its water services to Florida Utilities.

Five buildings in Apopka have been placed on the U.S. National Register of Historic Places through the Apopka Historical Society housed in the Museum of the Apopkans. 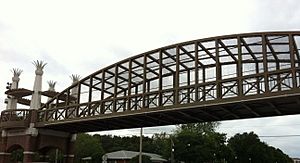 This bridge was built by Orange County, FL and the City of Apopka, FL over State Road 441 connecting two sections of the Rails-to-Trails system forming the West Orange Trail for bicyclists and pedestrians. It opened in June 2007.

On April 8, 2014, Apopka City Commissioner Joe Kilsheimer won an election to succeed John H. Land as mayor. Kilsheimer was sworn in on April 22, 2014.

Apopka is a fast-growing city and is expanding in all directions. Most notable are the new Lowes and Home Depot DIY stores to the north of the city on US 441 in the location of the previous Dunn Citrus grove (the stretch of 441 which runs through the city is named after Fred N. Dunn). Other businesses on the former Dunn Citrus site include Staples office supply and a second Chili's restaurant.

The John Land Apopka Expressway (Toll 414) opened on May 15, 2009, relieving some of US 441's traffic, taking the route from what is now the US 441 junction with SR 429, and then passing south of the city to rejoin US 441 at its junction with Maitland Boulevard South of the city.

Earthmoving began in the summer of 2010 to further expand the expressway, including an extension of Toll 414, known as Wekiva Parkway, created a junction at US 441 and Plymouth Sorrento Road. Master plans take the Wekiva Parkway extension further north and then east connecting to Interstate 4 at Sanford. The expansion was scheduled to be completed in the next several years. It will then be the shortest route from I-4 to the Disney attractions.

Detailed history of the greater Apopka and Central Florida area is detailed in Perrine Slim's book, The Pennings of Perrine Slim: Stories of Northwest Orange County Florida. Included are 100 pictures of the area.

Apopka's historic 1903 Eldorado--referred to as the Eldredge/McBride House is included in the book of the paintings of George E. Lewis, Oil 4 Water. The paintings were commissioned to raise funds for putting water wells in Guatemala.

All content from Kiddle encyclopedia articles (including the article images and facts) can be freely used under Attribution-ShareAlike license, unless stated otherwise. Cite this article:
Apopka, Florida Facts for Kids. Kiddle Encyclopedia.