The National Football League (NFL) is a professional American football league consisting of 32 teams, divided equally between the National Football Conference (NFC) and the American Football Conference (AFC). The NFL is one of the four major North American professional sports leagues, the highest professional level of American football in the world, the wealthiest professional sport league by revenue, and the sport league with the most valuable teams. The NFL's 17-week regular season runs from early September to late December, with each team playing 16 games and having one bye week. Following the conclusion of the regular season, seven teams from each conference (four division winners and three wild card teams) advance to the playoffs, a single-elimination tournament culminating in the Super Bowl, which is usually held on the first Sunday in February and is played between the champions of the NFC and AFC. The league is headquartered in New York City.

The NFL was formed in 1920 as the American Professional Football Association (APFA) before renaming itself the National Football League for the 1922 season. After initially determining champions through end-of-season standings, a playoff system was implemented in 1933 that culminated with the NFL Championship Game until 1966. Following an agreement to merge the NFL with the rival American Football League (AFL), the Super Bowl was first held in 1967 to determine a champion between the best teams from the two leagues and has remained as the final game of each NFL season since the merger was completed in 1970. Today, the NFL has the highest average attendance (67,591) of any professional sports league in the world and is the most popular sports league in the United States. The Super Bowl is also among the biggest club sporting events in the world, with the individual games accounting for many of the most watched television programs in American history and all occupying the Nielsen's Top 5 tally of the all-time most watched U.S. television broadcasts by 2015.

The Green Bay Packers hold the most combined NFL championships with 13, winning nine titles before the Super Bowl era and four Super Bowls afterwards. Since the creation of the Super Bowl, the Pittsburgh Steelers and New England Patriots both have the most championship titles at six.

History of the NFL 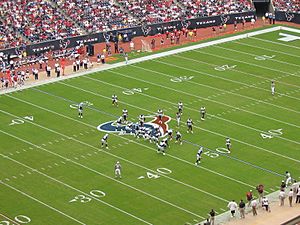 Teams in the AFC

Teams in the NFC

The teams in the NFL play games against each other from September to January. This time is called a season. Each team plays 16 games. This is how which games a team will play is chosen:

Since the 2006 season, the NFL has used a "flexible-scheduling" system for the last seven weeks of the regular season where there is a Sunday night game. The system is designed so that the league has the flexibility in selecting games to air on Sunday night that will feature the current hottest, streaking teams.

Under the system, all Sunday games in the affected weeks will tentatively have the "early" start time of 1 p.m. ET/10 a.m. PT, except those played in the Pacific or Mountain time zones, which will have the tentative start time of 4 p.m. ET/1 p.m. PT. On the Tuesday 12 days before the games, the league will move one game to the prime-time slot, and possibly move one or more 1 p.m. slotted games to the 4 p.m. slot. During the last week of the season, the league could re-schedule games as late as six days before the contests so that as many of the television networks as possible will be able to broadcast a game that has playoff implications.

At the end of every NFL season, the eight teams that finish the season at the top of their leagues and two teams from each conference that were the best teams apart from the eight league winners (these four teams are called Wild Cards) enter a competition to see who is the best team in the whole league. This is called the Playoffs. There are a total of 12 teams in the Playoffs, six from the NFC and six from the AFC. The six teams in each conference are listed in order of how well they played in the season. This is called seeding and it is done to make it easier for the better teams to win. The teams that did not win their leagues (the Wild Cards) are always the fifth and sixth seeds in the list, even if they were better than a team that won a different league.

In the first part of the playoffs (called Wild Card Weekend) there are four games.

The teams that lose these games are not in the playoffs competition any more. Now there are only 8 teams left.

In the second part of the playoffs (called the Divisional Playoffs) there are four games.

The teams that lose these games are not in the playoffs competition any more. Now there are only 4 teams left.

In the third part of the playoffs (called the Conference Championship Games) there are two games.

The last part of the playoffs is called the Super Bowl. The AFC Champion and the NFC Champion teams play each other to decide who is the best team in the NFL.

All content from Kiddle encyclopedia articles (including the article images and facts) can be freely used under Attribution-ShareAlike license, unless stated otherwise. Cite this article:
National Football League Facts for Kids. Kiddle Encyclopedia.