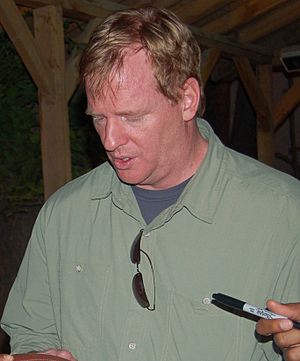 Roger Goodell (born February 19, 1959) is the current commissioner of the National Football League (NFL). He has held this position since August 8, 2006 when he took over duties for the retiring Paul Tagliabue.

As the commissioner, he has focused on how players behave off of the field, making more rules that can lead to players who get into trouble off of the field or with the law being fined or suspended.

All content from Kiddle encyclopedia articles (including the article images and facts) can be freely used under Attribution-ShareAlike license, unless stated otherwise. Cite this article:
Roger Goodell Facts for Kids. Kiddle Encyclopedia.