American football, referred to as football in the United States and Canada and also known as gridiron, is a team sport played by two teams of eleven players on a rectangular field with goalposts at each end.

The offense must advance at least ten yards in four downs or plays; if they fail, they turn over the football to the defense, but if they succeed, they are given a new set of four downs to continue the drive. Points are scored primarily by advancing the ball into the opposing team's end zone for a touchdown or kicking the ball through the opponent's goalposts for a field goal. The team with the most points at the end of a game wins.

A set of rule changes drawn up from 1880 onward by Walter Camp, the "Father of American Football", established the snap, the line of scrimmage, eleven-player teams, and the concept of downs. Later rule changes legalized the forward pass, created the neutral zone and specified the size and shape of the football.

The sport is closely related to Canadian football, which evolved in parallel with and at the same time as the American game (although their rules were developed independently from that of Camp's).

The National Football League, the most popular American football league, has the highest average attendance of any professional sports league in the world. Its championship game, the Super Bowl, ranks among the most-watched club sporting events in the world.

The league has an annual revenue of around US$10 billion. Other leagues exist worldwide, but the sport does not have the international popularity of other American sports like baseball or basketball. 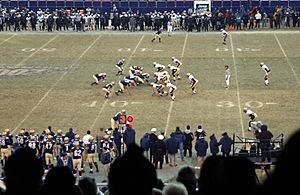 The main leagues that play American football (usually just referred to as "football" in America) are the professional National Football League, and the National Collegiate Athletic Association, which plays college football. In the National Football League, players are paid a lot of money. In the National Collegiate Athletic Association, players simply play for the pride of their school, or for the chance to join a top team. Over a million boys (and a small number of girls) play high school football.

A football game is played with a ball called a football. The sport is played on a grass (or artificial turf) field, exactly 360 feet (120 yards) long and 160 feet (53⅓ yards) wide. The end zones, one at each end of the field, are 10 yards long.

The players wear protective equipment, including a helmet with face-mask, shoulder pads, thigh pads, and often a mouth guard. A team has four chances, or "downs", to advance the ball 10 yards while the opposing team tries to stop it. Certain players advance the ball by carrying or throwing it.

Teams can score by advancing the ball to the other team's end zone or by kicking the ball through a goalpost placed at the back of the end zone. American football is carefully regulated by time and rules, which are enforced by officials, who also determine when a team scores.

A college or professional football game is 60 minutes long, and is divided into 15-minute quarters. In high schools, the quarters are 12 minutes long, and games for younger children are often shorter still. After the first two quarters, the teams rest during halftime. In NFL football, if the game is tied after the four quarters, the two teams compete in at least one more 15-minute period called overtime.

A touchdown is achieved when a player has legal possession of the ball and the ball crosses an imaginary vertical plane above the opposing team's goal line. After a touchdown, the scoring team attempts a try for 1 or 2 points. A successful touchdown is signaled by an official extending both arms vertically above the head. 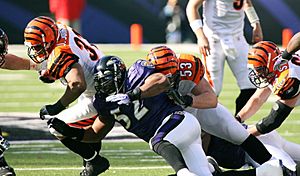 Players on the Defensive line, a linebacker, and defensive backs (cornerbacks and American football safeties) attempt to tackle the offensive player who carries the football.

Some team members only play during certain times. These players belong to the Special Teams. The kicker can kick the ball to the other team or between the uprights, while the placeholder holds the ball steady. The kick returner runs the ball down the field in an attempt to score points after catching the ball. 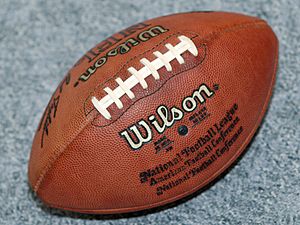 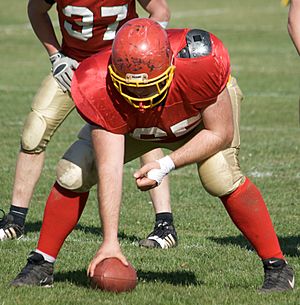 Exhibition season (better known as Pre-Season) is in August. In the exhibition season, the teams get ready for the regular season by having training. Teams have practices to help the team get better and see who will make the team. All of the teams play 4 games before the regular season starts, and the games do not change what team gets to the post season. Because of it, teams do not use their best players much, and use the games as more practice.

The 32 NFL teams are divided into two conferences: the National Football Conference (NFC) and the American Football Conference (AFC). Each of them is divided in four divisions: North, South, West and East. Each division includes four teams. The season lasts 17 weeks. Each team plays 16 games and has one week off. This week of rest is called a "bye week".

At the end of the regular season, the winners of each division, and the next two best teams in each area and the best 6 AFC teams play in a tournament. NFC's champion and AFC's champion play the NFL's final game, the Super Bowl. The event is often treated as a National holiday as many stores close for the event. The day of the event is commonly known nationwide as Super Bowl Sunday.

All content from Kiddle encyclopedia articles (including the article images and facts) can be freely used under Attribution-ShareAlike license, unless stated otherwise. Cite this article:
American football Facts for Kids. Kiddle Encyclopedia.