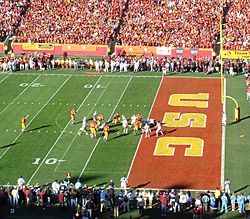 A player rushes into the red-painted end zone, scoring a touchdown during a college football game.

The end zone refers to the scoring area on the field, according to gridiron-based codes of football. It is the area between the end line and goal line bounded by the sidelines. There are two end zones. Each one is on an opposite side of the field. It is bordered on all sides by a white line indicating its beginning and end points. Usually padded orange square markers are placed at each of the four corners as a visual aid. Canadian rule books use the terms goal area and dead line instead of end zone and end line respectively. But the latter terms are the more common in Canadian English. In American football the end zone is 10 yards deep. Canadian football end zones are 20 yards; 10 yards deeper than those in American football. Sports like association football and ice hockey require the puck or ball to pass completely over the goal line to count as a score. Canadian and American football merely need the nose of the ball to break the vertical plane of the outer edge of the goal line.

All content from Kiddle encyclopedia articles (including the article images and facts) can be freely used under Attribution-ShareAlike license, unless stated otherwise. Cite this article:
End zone Facts for Kids. Kiddle Encyclopedia.