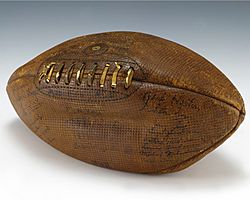 A leather football used in a 1932 college football game

In Canada and the United States, a football (also called a pigskin) is a ball, roughly in the form of a prolate spheroid, used in the context of playing gridiron football. Footballs are often made of cow hide leather, as such a material is required in professional and collegiate football. Footballs used in recreation, and in organized youth leagues, may be made of rubber or plastic materials (high school football rule books still allow inexpensive all-rubber footballs, though they are less common than leather). 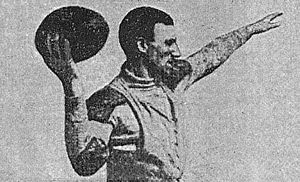 Early American footballs were essentially rugby balls, later redesigned to make them easier to throw. In this 1907 photo, Bradbury Robinson, who threw the first legal forward pass, demonstrates an "Overhand spiral—fingers on lacing"

Coach John Heisman (the namesake for today's Heisman Trophy) was a Shakespearean actor in the offseason, and would open each season by saying to his freshmen football players:

What is this? It is a prolate spheroid, an elongated sphere in which the outer leather casing is drawn tightly over a somewhat smaller rubber tubing. Better to have died as a small boy than to fumble this football.

Leather panels are typically tanned to a natural brown color, which is usually required in professional leagues and collegiate play. At least one manufacturer uses leather that has been tanned to provide a "tacky" grip in dry or wet conditions. Historically, white footballs have been used in games played at night so that the ball can be seen more easily; however, improved artificial lighting conditions have made this no longer necessary. At most levels of play (but not, notably, the NFL), white stripes are painted on each end of the ball, halfway around the circumference, to improve nighttime visibility and also to differentiate the college football from the pro football. However, the NFL once explored the usage of white-striped footballs – in Super Bowl VIII.

The leather is usually stamped with a pebble-grain texture to help players grip the ball. Some or all of the panels may be stamped with the manufacturer's name, league or conference logos, signatures, and other markings. Four panels or pieces of leather or plastic are required for each football. After a series of quality control inspections for weight and blemishes, workers begin the actual manufacturing process.

Two of the panels are perforated along adjoining edges, so that they can be laced together. One of these lacing panels receives an additional perforation and reinforcements in its center, to hold the inflation valve. Each panel is attached to an interior lining. The four panels are then stitched together in an "inside-out" manner. The edges with the lacing holes, however, are not stitched together. The ball is then turned right side out by pushing the panels through the lacing hole. A polyurethane or rubber lining called a bladder is then inserted through the lacing hole. Polyvinyl chloride or leather laces are inserted through the perforations, to provide a grip for holding, hiking and passing the football. Before play, according to the NFL rules, the ball must be inflated to an air pressure between 12.5 and 13.5 pounds per square inch (86 and 93 kilopascals). The ball weighs 14 to 15 ounces (400 to 430 grams).

In the CFL the stripes traverse the entire circumference of the ball; its ball used slightly different dimensions prior to the 2018 season, when the league adopted the NFL specifications for its ball with the previous striping retained. The UFL used a ball with lime-green stripes. The 2001 XFL used a novel color pattern, a black ball with red curved lines in lieu of stripes, for its footballs; this design was redone in a tan and navy color scheme for the Arena Football League in 2003. The 2020 XFL is standard brown but with X markings at each point. Three indoor American football leagues; the Can-Am League, UIFL, and AIF, used a ball with red, white and blue panels. The USFL (1983–85) used the same Wilson football the NFL used at the time, with the only differences being the word markings and signature. The World Football League's football was a distinct orange color, said to be more visible during the night as most of that league's games would be played in the evenings.

Typical modern American football as used in the NFL, manufactured by Wilson

In an NFL game, the home club must have 36 balls for an outdoor game or 24 for an indoor game, and they must be available for the referee to test with a pressure gauge two and a half hours before the game. Twelve new footballs, sealed in a special box and shipped by the manufacturer, are opened in the officials’ locker room two hours and 15 minutes before the game. These balls are specially marked with the letter "K" and are used exclusively for the kicking game. The visiting team may also present 12 balls to the referee for outdoor games for inspection. The NFL introduced kicking balls (K-balls) to prevent teams from doctoring balls after the NFL Competition Committee determined that teams conditioned balls so they would fly higher and travel farther.

Since 1941, Horween Leather Company has been the exclusive supplier of leather for National Football League footballs. The arrangement was established by Arnold Horween, who had played and coached in the NFL. Horween Leather Company also supplies leather to Spalding, supplier of balls to the Arena Football League. Despite the moniker "pigskin" sometimes used to refer to footballs, cow leather is used.

Minnesota Vikings kicker Fred Cox, during his NFL career, is credited with developing an all-polyurethane foam football, which he sold to Nerf. Nerf later added the vortex football, also made of foam, with a smaller body and torpedo tail fins, resembling a Ketchum Grenade. Foam footballs such as Nerf's, especially the vortex football, can be thrown greater distances than a traditional air-filled leather or rubber ball, but in turn, kicking range is greatly reduced, with the vortex football being practically unkickable.

All content from Kiddle encyclopedia articles (including the article images and facts) can be freely used under Attribution-ShareAlike license, unless stated otherwise. Cite this article:
Ball (gridiron football) Facts for Kids. Kiddle Encyclopedia.