The Canadian Football League (CFL) (known as Ligue canadienne de football (LCF) in French) is a professional sports league in Canada. They play Canadian football and are they highest level of competition for the sport. The CFL is the second most popular sports league in Canada after the NHL. There are 9 teams; 4 in the Eastern Division and 5 Western Division. The Grey Cup is the championship for the CFL. The league was founded on January 19, 1958, making it the second oldest professional gridiron football league in North America that still operates.

However, several of its teams played for many years before the modern league was formed. One current team, the Toronto Argonauts, was formed in 1873, and four other teams claim descent from teams that played before 1900. 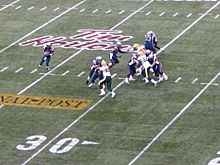 All content from Kiddle encyclopedia articles (including the article images and facts) can be freely used under Attribution-ShareAlike license, unless stated otherwise. Cite this article:
Canadian Football League Facts for Kids. Kiddle Encyclopedia.