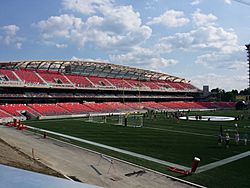 TD Place Stadium (originally Lansdowne Park and formerly Frank Clair Stadium) is a stadium in Ottawa, Ontario, Canada. It is the home to the Ottawa Redblacks of the Canadian Football League (CFL) and Atlético Ottawa of the Canadian Premier League (CPL). It has a capacity for 24,000 people.

All content from Kiddle encyclopedia articles (including the article images and facts) can be freely used under Attribution-ShareAlike license, unless stated otherwise. Cite this article:
TD Place Stadium Facts for Kids. Kiddle Encyclopedia.