BMO Field is an outdoor stadium located at Exhibition Place in Toronto, Ontario, Canada. It is the home stadium of MLS team Toronto FC and the CFL team Toronto Argonauts. It was built on the site of the former Exhibition Stadium. The stadium was first opened in 2007. BMO Field hosted matches during the 2007 FIFA U-20 World Cup and 2014 FIFA U-20 Women's World Cup. The stadium has also hosted rugby union matches.

BMO Field is the fifth stadium to be built at its exact location at Exhibition Place. The most recent was Exhibition Stadium, which was demolished in 1999.

On May 11, 2006, Major League Soccer announced that Toronto FC would join the league as its 13th (and first Canada-based) team in 2007, with BMO Field being its own stadium.

In August 2017, Toronto FC II, which normally hosted their games at the Ontario Soccer Centre, announced that it would move its home games to BMO Field and Lamport Stadium, starting with the 2018 season. The team moved their home games to BMO Training Ground for the 2019 season, after they dropped to the USL League One.

According to the United Bid Book, BMO Field is listed as a stadium for the 2026 FIFA World Cup. 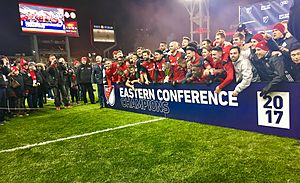 BMO Field has hosted several MLS Cup matches, and was the first stadium outside of the United States to host the event in 2010, when the Colorado Rapids won 2-1 against FC Dallas. The first MLS home playoff game held at BMO Field saw Toronto FC defeat the Philadelphia Union 3–1 on October 26, 2016. BMO Field hosted the MLS Cup again in 2016, as Toronto FC won the MLS Eastern Championship and hosted the Seattle Sounders in the final. Seattle won the match 5–4 on penalties, after a goalless draw after extra time.

On December 9, 2017, BMO Field hosted its second consecutive MLS Cup in 2017. The match was a rematch between Toronto FC and the Seattle Sounders, who played each other in the 2016 MLS Cup. Toronto FC won 2–0, and became the first MLS team to complete a domestic treble, and was the first Canadian team to win the MLS Cup. 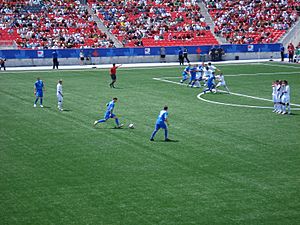 BMO Field hosted the 2007 FIFA U-20 World Cup, the first major tournament held at the stadium. The stadium saw the Canadian Under-20 squad once. The stadium also saw six knockout stage games including the Final; which was won by Argentina. Due to FIFA sponsorship regulations, the venue was referred to as the "National Soccer Stadium" during the event.

The Argonauts moved to the renovated BMO Field, starting with the 2016 season. On October 1, 2015, BMO Field was awarded the rights to host the 104th Grey Cup, which was played on November 27, 2016. On June 11, 2016, the Argonauts played their first game at the stadium, a preseason (exhibition) game against the Hamilton Tiger-Cats. The Argos won that game 25–16. On June 23, the Argos played their first regular season game at BMO Field, where they lost 42–20 to the Hamilton Tiger-Cats.

On January 1, 2017, BMO Field hosted an NHL outdoor game, the NHL Centennial Classic, in honour of the Toronto Maple Leafs' and the NHL's centennial seasons. The Leafs hosted the Detroit Red Wings, in a rematch of the 2014 NHL Winter Classic, which was held three years before. The venue was referred to as "Exhibition Stadium" for its duration, as Scotiabank (a direct competitor to BMO), was title sponsor of the event.

As of 6 October 2020, the only music concert at BMO Field was performed by the progressive rock group Genesis on September 7, 2007. 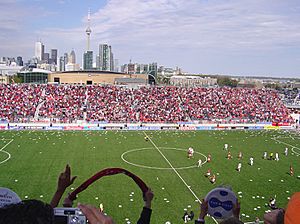 View of the stadium immediately after the Toronto FC scored their first goal in club history on June 12, 2007.

The first goal at BMO Field was scored by Eddie Johnson for the Kansas City Wizards in a 1–0 Major League Soccer win over home side Toronto FC in the stadium opener on April 28, 2007. The first Toronto FC goal at the stadium was Danny Dichio's first-half strike against Chicago Fire on May 12, 2007 (also his club's first MLS goal).

The first goal at BMO Field scored by a Canadian came at the official opening on May 11, 2007, in a U-20 friendly between Canada and Argentina. David Edgar scored a penalty in a 2–1 defeat for Canada, just four minutes after Gómez had scored the first international goal at the stadium.

The first Toronto FC goal scored by a Canadian at BMO Field was in a June 25, 2007 friendly against Aston Villa of the English Premier League. Andrea Lombardo scored an equalizer at BMO Field's south end to make it 2–2 before Aston Villa ran out 4–2 winners. The first league goal at BMO Field scored by a Canadian came when Miguel Cañizalez scored for Toronto FC in the second minute of their 2–1 defeat to the Columbus Crew on September 22, 2007, snapping an 824-minute MLS goalless streak.

In Canadian football, the first CFL points scored at BMO Field was a Toronto Argonauts completed touchdown pass caught by Vidal Hazelton, thrown by Logan Kilgore, in a June 11, 2016 exhibition Argos win; final score 25–16. The first CFL regular season points scored at the stadium was a conceded safety touch of 2 points by Canadian Argos kicker/punter Lirim Hajrullahu in a 20–42 loss on June 23. The first regular season points scored by the Argos at BMO Field was a successful field goal kicked by Hajrullahu in the same game. On July 25, the Argonauts won their first regular season game at their new home, defeating the Montreal Alouettes 30–17.

The largest crowd for rugby at BMO Field and in Canada occurred when the Canada national rugby union team hosted the New Zealand Māori All Blacks before 22,566 people on November 3, 2013. The Maori All Blacks won the match 40–15.

All content from Kiddle encyclopedia articles (including the article images and facts) can be freely used under Attribution-ShareAlike license, unless stated otherwise. Cite this article:
BMO Field Facts for Kids. Kiddle Encyclopedia.