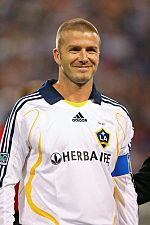 David Beckham was the league's first Designated Player in 2007.

Major League Soccer (MLS) is an American soccer league that started in 1996. As of the next season in 2016, there are 20 teams in the league. At least three teams will join the league in the near future. Two are set to join in 2017, a third is planning to join in 2018, and a fourth will join once it builds a new stadium, which will not happen until at least 2018. The commissioner of the league (the person in charge) is Don Garber.

MLS, founded in the United States, is a fully professional league with 20 teams, three of which are based in Canada, and is the top soccer league in both countries. Referees are approved by the United States Soccer Federation and Canadian Soccer Association, which run the sport in the two countries. In turn, U.S. Soccer and the CSA are members of FIFA, which governs all play between national teams and sets the rules for the sport along with the national governing bodies of England, Northern Ireland, Scotland, and Wales.

MLS was formed in 1993 as a professional league, with play starting with 10 teams in 1996. The MLS regular season starts in late March and ends in October, with each team playing 34 games. The regular season is followed by a 12-team playoff tournament to decide the league champion.

All content from Kiddle encyclopedia articles (including the article images and facts) can be freely used under Attribution-ShareAlike license, unless stated otherwise. Cite this article:
Major League Soccer Facts for Kids. Kiddle Encyclopedia.