Bolivia (officially called Plurinational State of Bolivia) is a country in South America. It is land locked by Brazil, Paraguay, Argentina, Peru, and Chile. Evo Morales became the president of Bolivia in January 2006. The population of Bolivia is 10.67 million (2013).

Bolivia is named after Simón Bolívar. The main languages are Spanish and Quechua, but there are other languages too.

Before Spanish colonization, the Andean region of Bolivia was part of the Inca Empire, while the northern and eastern lowlands were inhabited by independent tribes. Spanish conquistadors arriving from Cusco and Asunción took control of the region in the 16th century. During the Spanish colonial period Bolivia was administered by the Real Audiencia of Charcas. Spain built its empire in large part upon the silver that was extracted from Bolivia's mines. After the first call for independence in 1809, 16 years of war followed before the establishment of the Republic, named for Simón Bolívar. Over the course of the 19th and early 20th century Bolivia lost control of several peripheral territories to neighboring countries including the seizure of its coastline by Chile in 1879. Bolivia remained relatively politically stable until 1971, when Hugo Banzer led a CIA-supported coup d'état which replaced the socialist government of Juan José Torres with a military dictatorship headed by Banzer; Torres was murdered in Buenos Aires, Argentina by a right-wing death squad in 1976. Banzer's regime cracked down on leftist and socialist opposition and other forms of dissent, resulting in the torture and deaths of a number of Bolivian citizens. Banzer was ousted in 1978 and later returned as the democratically elected president of Bolivia from 1997 to 2001.

Modern Bolivia is a charter member of the UN, IMF, NAM, OAS, ACTO, Bank of the South, ALBA, and USAN. 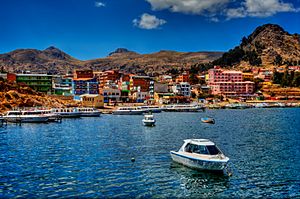 Copacabana, on the Bolivian side of Lake Titicaca. 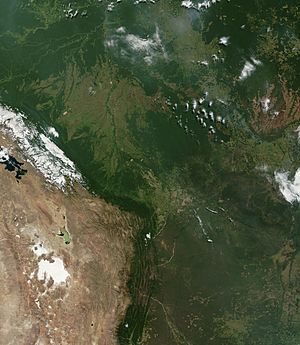 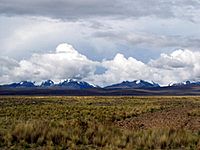 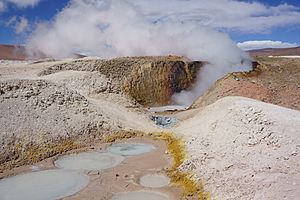 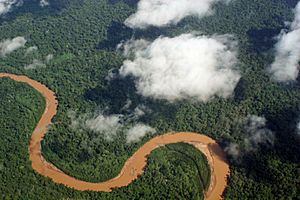 Bolivia is located in the central zone of South America, between 57°26'–69°38'W and 9°38'–22°53'S. With an area of 1,098,581 square kilometres (424,164 sq mi), Bolivia is the world's 28th-largest country, and the fifth largest country in South America, extending from the Central Andes through part of the Gran Chaco, Pantanal and as far as the Amazon. The geographic center of the country is the so-called Puerto Estrella ("Star Port") on the Río Grande, in Ñuflo de Chávez Province, Santa Cruz Department.

The geography of the country exhibits a great variety of terrain and climates. Bolivia has a high level of biodiversity, considered one of the greatest in the world, as well as several ecoregions with ecological sub-units such as the Altiplano, tropical rainforests (including Amazon rainforest), dry valleys, and the Chiquitania, which is a tropical savanna. These areas feature enormous variations in altitude, from an elevation of 6,542 metres (21,463 ft) above sea level in Nevado Sajama to nearly 70 metres (230 ft) along the Paraguay River. Although a country of great geographic diversity, Bolivia has remained a landlocked country since the War of the Pacific. Puerto Suárez, San Matías and Puerto Quijarro are located in the Bolivian Pantanal.

Bolivia can be divided into three physiographic regions: 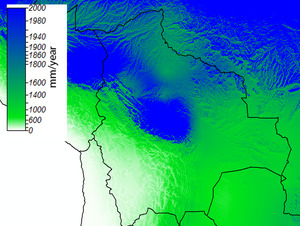 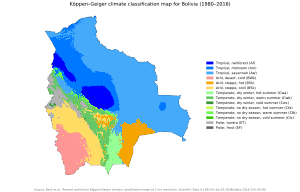 The geology of Bolivia comprises a variety of different lithologies as well as tectonic and sedimentary environments. On a synoptic scale, geological units coincide with topographical units. Most elementally, the country is divided into a mountainous western area affected by the subduction processes in the Pacific and an eastern lowlands of stable platforms and shields. 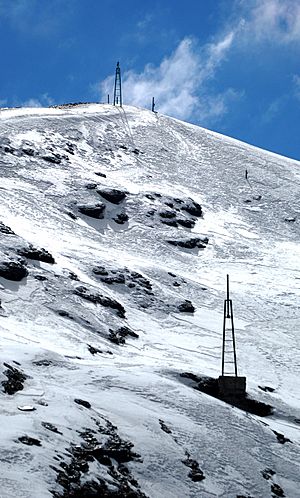 The climate of Bolivia varies drastically from one eco-region to the other, from the tropics in the eastern llanos to a polar climate in the western Andes. The summers are warm, humid in the east and dry in the west, with rains that often modify temperatures, humidity, winds, atmospheric pressure and evaporation, yielding very different climates in different areas. When the climatological phenomenon known as El Niño takes place, it causes great alterations in the weather. Winters are very cold in the west, and it snows in the mountain ranges, while in the western regions, windy days are more common. The autumn is dry in the non-tropical regions.

The population of Bolivia is approximately 10,907,778 people. The ethnic composition of the country is like the following:

A proportional representation of Bolivia exports, 2019

La Paz (up) and Santa Cruz (middle) are the main financial centers of Bolivia. Young miners at work in Potosí (down).

Bolivia in 2016 boasted the highest proportional rate of financial reserves of any nation in the world, with Bolivia's rainy day fund totaling some US$15 billion or nearly two-thirds of total annual GDP, up from a fifth of GDP in 2005. Even the IMF was impressed by Morales' fiscal prudence.

A major blow to the Bolivian economy came with a drastic fall in the price of tin during the early 1980s, which impacted one of Bolivia's main sources of income and one of its major mining industries. Since 1985, the government of Bolivia has implemented a far-reaching program of macroeconomic stabilization and structural reform aimed at maintaining price stability, creating conditions for sustained growth, and alleviating scarcity.

Bolivia has the second largest natural gas reserves in South America. The government has a long-term sales agreement to sell natural gas to Brazil through 2019.

The US Geological Service estimates that Bolivia has 5.4 million cubic tonnes of lithium, which represent 50%–70% of world reserves. However, to mine for it would involve disturbing the country's salt flats (called Salar de Uyuni), an important natural feature which boosts tourism in the region. The government does not want to destroy this unique natural landscape to meet the rising world demand for lithium. On the other hand, sustainable extraction of lithium is attempted by the government. This project is carried out by the public company "Recursos Evaporíticos" subsidiary of COMIBOL.

Salar de Uyuni, one of the most visited sites in Bolivia.

The income from tourism has become increasingly important. Bolivia's tourist industry has placed an emphasis on attracting ethnic diversity. The most visited places include Nevado Sajama, Torotoro National Park, Madidi National Park, Tiwanaku and the city of La Paz.

The best known of the various festivals found in the country is the "Carnaval de Oruro", which was among the first 19 "Masterpieces of the Oral and Intangible Heritage of Humanity", as proclaimed by UNESCO in May 2001.

Bolivia's Yungas Road was called the "world's most dangerous road" by the Inter-American Development Bank, called (El Camino de la Muerte) in Spanish. The northern portion of the road, much of it unpaved and without guardrails, was cut into the Cordillera Oriental Mountain in the 1930s. The fall from the narrow 12 feet (3.7 m) path is as much as 2,000 feet (610 m) in some places and due to the humid weather from the Amazon there are often poor conditions like mudslides and falling rocks. Each year over 25,000 bikers cycle along the 40 miles (64 km) road. In 2018, an Israeli woman was killed by a falling rock while cycling on the road.

The Apolo road goes deep into La Paz. Roads in this area were originally built to allow access to mines located near Charazani. Other noteworthy roads run to Coroico, Sorata, the Zongo Valley (Illimani mountain), and along the Cochabamba highway (carretera). According to researchers with the Center for International Forestry Research (CIFOR), Bolivia's road network was still underdeveloped as of 2014. In lowland areas of Bolivia there is less than 2,000 kilometres (2,000,000 m) of paved road. There have been some recent investments; animal husbandry has expanded in Guayaramerín, which might be due to a new road connecting Guayaramerín with Trinidad.

TAM – Transporte Aéreo Militar (the Bolivian Military Airline) was an airline based in La Paz, Bolivia. It was the civilian wing of the 'Fuerza Aérea Boliviana' (the Bolivian Air Force), operating passenger services to remote towns and communities in the North and Northeast of Bolivia. TAM (a.k.a. TAM Group 71) has been a part of the FAB since 1945. The airline company has suspended its operations since 23 September 2019.

Boliviana de Aviación, often referred to as simply BoA, is the flag carrier airline of Bolivia and is wholly owned by the country's government.

Although a civil transport airline, TAB – Transportes Aéreos Bolivianos, was created as a subsidiary company of the FAB in 1977. It is subordinate to the Air Transport Management (Gerencia de Transportes Aéreos) and is headed by an FAB general. TAB, a charter heavy cargo airline, links Bolivia with most countries of the Western Hemisphere; its inventory includes a fleet of Hercules C130 aircraft. TAB is headquartered adjacent to El Alto International Airport. TAB flies to Miami and Houston, with a stop in Panama. 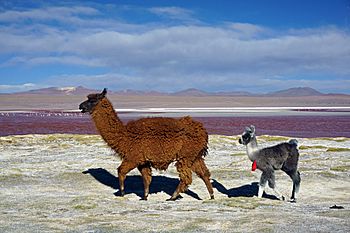 Bolivia, with an enormous variety of organisms and ecosystems, is part of the "Like-Minded Megadiverse Countries".

Bolivia's variable altitudes, ranging from 90–6,542 metres (295–21,463 ft) above sea level, allow for a vast biologic diversity. The territory of Bolivia comprises four types of biomes, 32 ecological regions, and 199 ecosystems. Within this geographic area there are several natural parks and reserves such as the Noel Kempff Mercado National Park, the Madidi National Park, the Tunari National Park, the Eduardo Avaroa Andean Fauna National Reserve, and the Kaa-Iya del Gran Chaco National Park and Integrated Management Natural Area, among others.

Bolivia boasts over 17,000 species of seed plants, including over 1,200 species of fern, 1,500 species of marchantiophyta and moss, and at least 800 species of fungus. In addition, there are more than 3,000 species of medicinal plants. Bolivia is considered the place of origin for such species as peppers and chili peppers, peanuts, the common beans, yucca, and several species of palm. Bolivia also naturally produces over 4,000 kinds of potatoes.

Bolivia has more than 2,900 animal species, including 398 mammals, over 1,400 birds (about 14% of birds known in the world, being the sixth most diverse country in terms of bird species), 204 amphibians, 277 reptiles, and 635 fish, all fresh water fish as Bolivia is a landlocked country. In addition, there are more than 3,000 types of butterfly, and more than 60 domestic animals. 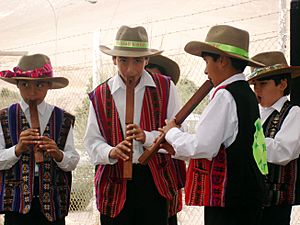 Bolivian culture has many Inca, Aymara and other native influences in religion, music and clothing. There is a big festival in Oruro, which is called "El carnaval de Oruro". People in Bolivia like playing football, and football, which is often played in the street. Zoos are also very popular, but they do not have much money.

The Cantuta (often spelled kantuta or qantuta) (Cantua buxifolia or Fuchsia buxifolia) is a flower found in the Yungas, and is the national flower of Bolivia along with the patujú (Heliconia rostrata) found in the tropical regions of Bolivia.

All content from Kiddle encyclopedia articles (including the article images and facts) can be freely used under Attribution-ShareAlike license, unless stated otherwise. Cite this article:
Bolivia Facts for Kids. Kiddle Encyclopedia.