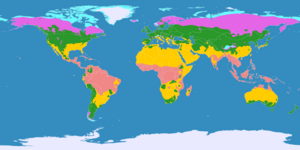 The vast majority of the world's human population resides in temperate zones, especially in the northern hemisphere, due to its greater mass of land. The biggest described number in temperate region in the world is found in southern Africa, where some 24,000 taxa (species and infraspecific taxa) have been described, but the native fauna and flora of this region does not have much cultural importance for the majority of the human population of the world that lives in Temperate Zones and that live in the Northern Hemisphere, only environmental importance.

Farming is a large-scale practice in the temperate regions (except for boreal/subarctic regions) due to the plentiful rainfall and warm summers, because most agricultural activity occurs in the spring and summer, cold winters have a small effect on agricultural production. Extreme winters or summers have a huge impact on the productivity of agriculture.

Temperate regions have the majority of the world's population, which leads to large cities. There are a couple of factors why the climate of large city landscapes differs from the climate of rural areas. One factor is the strength of the absorption rate of builds and asphalt, which is higher than natural land. The other large factor is the burning of fossil fuels from buildings and vehicles. These factors have led to the average climate of cities to be warmer than surrounding areas.