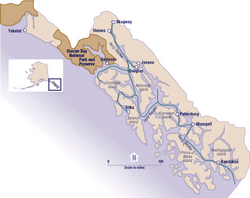 Southeast Alaska, sometimes referred to as the Alaska Panhandle, is the southeastern portion of the U.S. state of Alaska, which lies west from the northern half of the Canadian province, British Columbia. The majority of Southeast Alaska's area is part of the Tongass National Forest, the United States' largest national forest. In many places, the international border runs along the crest of the Boundary Ranges of the Coast Mountains (see Alaska boundary dispute). The region is noted for its scenery and mild rainy climate. 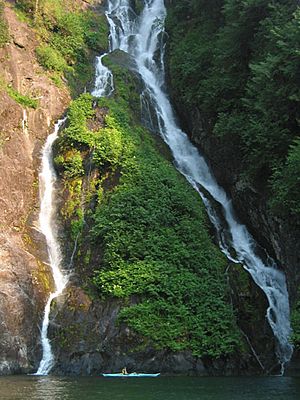 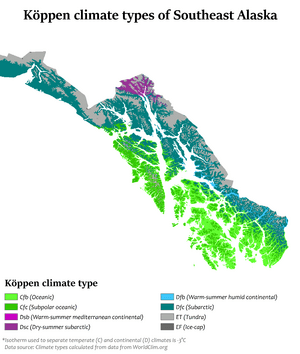 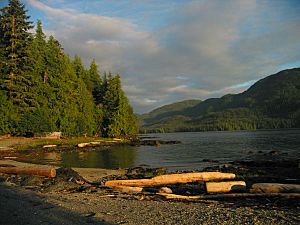 The Tongass National Forest, near Ketchikan 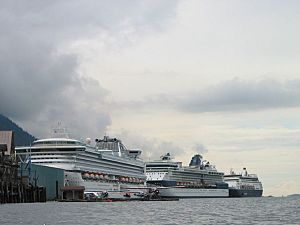 Southeast Alaska is the northern terminus of the Inside Passage, a protected waterway of convoluted passages between islands and fjords, beginning in Puget Sound in Washington state. This was an important travel corridor for Tlingit and Haida Native peoples, as well as gold-rush era steamships. In modern times it is an important route for Alaska Marine Highway ferries as well as cruise ships. Southeast Alaska has a land area of 35,138 square miles (91,010 km2) comprising seven entire boroughs and two census areas, in addition to the portion of the Yakutat Borough lying east of 141° West longitude. Although it has only 6.14 percent of Alaska's land area, it is larger than the state of Maine, and almost as large as the state of Indiana. The Southeast Alaskan coast is roughly as long as the west coast of Canada. The 2010 census population of Southeast was 71,616 inhabitants, about 45 percent of whom were concentrated in the city of Juneau.

On August 20, 1902, President Theodore Roosevelt established the Alexander Archipelago Forest Reserve, which formed the heart of the Tongass National Forest that covers most of the region.

The Ecological Atlas of Southeast Alaska, published by Audubon Alaska in 2016, offers an overview of the region's landscape, birds, wildlife, human uses, climate change, and more, synthesizing data from agencies and a variety of other sources. 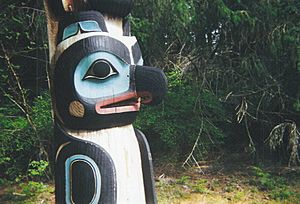 This area is the traditional homeland of the Tlingit, and home of a historic settling of Haida as well as a modern settlement of Tsimshian. The region is closely connected to Seattle and the American Pacific Northwest economically and culturally.

In modern times, southeastern Alaskans can often be identified by their fashion choices, notably Xtratuf boots, and "shirtjacs" (a garment having aspects of both shirt and jacket).

The border between the Canadian province of British Columbia and Alaska is known as the Alaska boundary dispute, where the United States, Canada and the United Kingdom and British Columbia claimed different borderlines at the Alaskan Panhandle. While the British foreign affairs were in favour of support of the Canadian argument, the event resulted in what was thought of as a betrayal, leading to alienation of the British from the new nation of Canada.

Historian Patricia Roppel authored thirteen books and more than 100 articles on the region.

Due to the extremely rugged, mountainous nature of Southeastern Alaska, almost all communities (with the exception of Hyder, Skagway, and Haines) have no road connections outside of their locale, so aircraft and boats are the major means of transport. The Alaska Marine Highway passes through this region.

Alaska Airlines is by far the largest air carrier in the region, with Juneau's Juneau International Airport serving as the aerial hub for all of Southeast and Ketchikan's Ketchikan International Airport serving as a secondary hub for southern Southeast Alaska. Alaska's bush airlines and air taxis serve many of the smaller and more isolated communities and villages in the regions. Many communities are accessible by air only by floatplane, as proper runways are often difficult to construct on the steep island slopes.

Southeast Alaska is primarily served by the state-run Alaska Marine Highway, which links Skagway, Haines, Hoonah, Juneau, Sitka, Petersburg, Wrangell, Ketchikan and other outlying communities with Prince Rupert, BC and Bellingham, Washington; and secondarily by the Prince of Wales Island-based Inter-Island Ferry Authority, which provides the only scheduled passenger and auto ferry service to the island. A new Authority, the Rainforest Islands Ferry Authority, was created and in 2014 may possibly operate the North End route. The Authority would connect Coffman Cove with Wrangell and Petersburg. Small companies like Sitka-based Allen Marine and other independent operators in the Lynn Canal occasionally also offer marine passenger service. Ship traffic in the area is seasonally busy with cruise ships.

All content from Kiddle encyclopedia articles (including the article images and facts) can be freely used under Attribution-ShareAlike license, unless stated otherwise. Cite this article:
Southeast Alaska Facts for Kids. Kiddle Encyclopedia.