Metlakatla ( Tsimshian: Maxłakxaała or Wil uks t’aa mediik) is a census-designated place (CDP) on Annette Island in Prince of Wales-Hyder Census Area, Alaska, United States. At the 2000 census the population was 1,375; this had grown to 1,405 by the 2010 census.

Since the late 19th century, it has been the major settlement of the Metlakatla Indian Community of the federally recognized Annette Island Reserve, the only remaining reserve in Alaska. The Metlakatla voted to opt out of the Alaska Native Claims Settlement Act of the 1970s and retained rights to their land and waters. Membership in the community is primarily by lineage; it consists primarily of Tsimshian people and also includes those from other Alaskan Native tribes who wish to join the Metlakatla Indian Community as a bona fide member. Bona fide membership is granted upon approval of the Metlakatla Tribal Council and Executives. 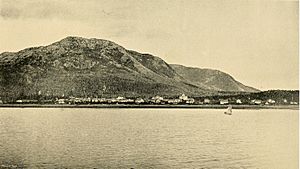 Metlakatla as it appeared in the 1890s.

Metlakatla comes from Maxłakxaała, a Tsimshian word meaning "Salt Water Passage." Metlakatla was named after another village of the same name ("Old Metlakatla") in British Columbia, which is on Metlakatla Pass, near Prince Rupert. In a more ancient time, it was a Tlingit hunting ground known as Taquan. The Tsimshian were granted permission to own the land by Chief Johnson of the Tlingit tribe. 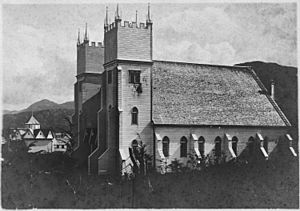 In 1886, William Duncan, an English tannery employee and lay member of the Church Missionary Society, had a doctrinal dispute with the Church authorities in Metlakatla, B.C. He and a devoted group of Tsimshian followers decided to leave Metlakatla. Duncan went to Washington, D.C., in the United States and asked the U.S. government to give his group land in Alaska. The U.S. under President Cleveland gave them Annette Island after a Tsimshian search committee in seagoing canoes discovered its calm bay, accessible beaches, nearby waterfall, and abundant fish. 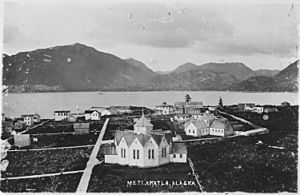 In 1887 the group arrived on the island and built a settlement in the Port Chester area. They laid out the town in a European-style grid pattern. It contained a church, a school, a cannery, and a sawmill. They named the town New Metlakatla, after the town they had left behind, but later dropped the "New." In 1888, William Duncan returned to Washington and lobbied the U.S. Congress for an Indian reserve on Annette Island. Although the reservation system had not been used in Alaska, Congress granted his request in 1891. Duncan remained at Metlakatla until his death in 1918. 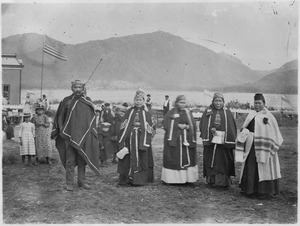 A group of Tsimshian at a Metlakatla wedding, c. 1900

During World War II, the United States made a treaty with the Metlakatla Indian Community to permit construction and operation of a military airbase on Annette Island. In exchange, the US promised to build a road connecting the ocean-side city to Alaska's Inside Passage (in order to allow year-round ferry service to Ketchikan). The airfield on Annette Island was garrisoned by Canadians during the war. This airfield became "the first Canadian force ever based in U.S. territory to directly assist in American defense."

After the war the property was adapted as a United States Coast Guard search and rescue base. This airfield served the area commercially until the 1970s, when the new Ketchikan Airport was built at Gravina Island in the Inside Passage.

Annette Islands Reserve, including surrounding islands, today is the only Indian reserve in Alaska. In the 1970s, the Metlakatla did not accept the Alaska Native Claims Settlement Act and give up their reserve and maintain sovereign immunity. "Annette Islands Reserve consists of 132,000 acres of land and water base. Metlakatla Indian Community has exclusive commercial and subsistence fishing rights to the islands’ waterways extending from 3,000 feet at mean low tide."

Travelers into Metlakatla usually reach it via the Alaska Marine Highway ferry. They can also travel to Ketchikan on Revillagigedo Island and cross the Revillagigedo Channel to Annette Island by boat or seaplane.

More than 50 years after the end of WWII, in 1997 the US Federal Government began construction of the cross-island road promised to Metlakatla under its wartime M.O.A. treaty. From 1997 to 2007, a joint task force under the overall command of Alaska Command, and led by the Missouri Army National Guard, worked at constructing a 15-mile road from one side of Annette Island to the other. Members of the Active and Reserve components of the Army, Navy, United States Air Force, and the Marines deployed to the island on 2- to 3-week rotations to build the road.

Metlakatla has a Marine west coast climate (Köppen Cfb), with windy and wet weather year-round, cool winters, and mild summers, and straddles the border between USDA Plant Hardiness Zones 7 and 8. Due to its southerly and maritime location, with an annual mean temperature of 46.6 °F (8.1 °C), the town is one of the warmest locations statewide. Most days during the winter see precipitation fall, and the seasonal total snowfall of 33.5 inches (85 cm) occurs mostly from November to March, with some accumulation during April and falls in May and October relatively rare; warm spells raise the high to 50 °F (10 °C) for several days each month. During summer, there is an average of 17 days with 70 °F (21 °C)+ highs, and rain still falls on around half of the days. Precipitation averages more than 101 inches (2.57 m) annually, with June and July being the driest months and October and November the wettest. Extreme temperatures have ranged from −4 °F (−20 °C) on January 30, 1947 up to 93 °F (34 °C) on June 19, 2004, with the temperature having fallen below 0 °F (−18 °C) only on a handful of occasions. In addition, the Annette Island Airport holds the Alaska state monthly record high temperatures for April (82 °F or 28 °C on April 29, 1976) and November (67 °F or 19 °C on November 1, 1970).

There were 469 households, out of which 38.8% had children under the age of 18 living with them, 48.0% were married couples living together, 15.6% had a female householder with no husband present, and 27.9% were non-families. 23.5% of all households were made up of individuals, and 6.6% had someone living alone who was 65 years of age or older. The average household size was 2.93 and the average family size was 3.50.

Metlakatla is served by the Annette Island School District.

A free Adult Education and GED program serves the community. It is run through the Southeast Regional Resource Center, which is based out of Juneau.

All content from Kiddle encyclopedia articles (including the article images and facts) can be freely used under Attribution-ShareAlike license, unless stated otherwise. Cite this article:
Metlakatla, Alaska Facts for Kids. Kiddle Encyclopedia.