Ketchikan ( KETCH-ih-kan) (Tlingit: Kichx̱áan) is a city in the Ketchikan Gateway Borough, Alaska, United States, the southeasternmost city in Alaska. With a population at the 2010 census of 8,050, it is the fifth-most populous city in the state, and tenth-most populous community when census-designated places are included. The surrounding borough, encompassing suburbs both north and south of the city along the Tongass Highway (most of which are commonly regarded as a part of Ketchikan, albeit not a part of the city itself), plus small rural settlements accessible mostly by water, registered a population of 13,477 in that same census. Estimates put the 2014 population at 13,787 people. Incorporated on August 25, 1900, Ketchikan is the earliest extant incorporated city in Alaska, because consolidation or unification elsewhere in Alaska resulted in dissolution of those communities' city governments. Ketchikan is located on Revillagigedo Island, so named in 1793 by Captain George Vancouver.

Ketchikan is named after Ketchikan Creek, which flows through the town, emptying into the Tongass Narrows a short distance southeast of its downtown. "Ketchikan" comes from the Tlingit name for the creek, Kitschk-hin, the meaning of which is unclear. It may mean "the river belonging to Kitschk"; other accounts claim it means "Thundering Wings of an Eagle". In modern Tlingit this name is rendered as Kichx̱áan. Ketchikan Creek served as a summer fish camp for Tlingit natives for untold years before the town was established by Mike Martin in 1885. According to the U.S. Postal Service, one of Ketchikan's two zip codes, 99950, is the highest-numbered in the United States.

Ketchikan's economy is based upon government services, tourism and commercial fishing. Civic boosters have dubbed the community the "Salmon Capital of the World." The Misty Fiords National Monument is one of the area's major attractions, and the Tongass National Forest has long been headquartered in Ketchikan, mostly in the city's historic Federal Building. For most of the latter half of the 20th century, a large portion of Ketchikan's economy and life centered on the Ketchikan Pulp Company pulp mill in nearby Ward Cove. The mill closed in 1997 in the wake of the passage of the Tongass Timber Reform Act of 1990, which reduced timber harvest targets in the national forest.

Ketchikan has the world's largest collection of standing totem poles, found throughout the city and at four major locations: Saxman Totem Park, Totem Bight State Park, Potlatch Park, and the Totem Heritage Center. Most of the totems at Saxman Totem Park and Totem Bight State Park are recarvings of older poles, a practice that began during the Roosevelt Administration through the Civilian Conservation Corps. The Totem Heritage Center displays preserved 19th-century poles rescued from abandoned village sites near Ketchikan.

A panorama of downtown Ketchikan and surrounding terrain from the peak of Deer Mountain in October 2004. Pennock Island divides the Tongass Narrows on the left, and Gravina Island lies on the distant side of the Narrows.

Ketchikan is located on Revillagigedo Island, 700 miles (1,100 km) north of Seattle, Washington, and 235 miles (378 km) south of Juneau, Alaska. It is surrounded by the Tongass National Forest, which is managed by the United States Forest Service from headquarters in the Ketchikan Federal Building downtown. 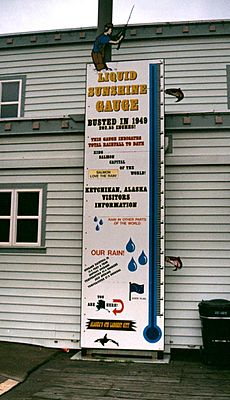 Ketchikan has a climate greatly modified and moderated by its maritime location, featuring an oceanic climate (Köppen Cfb) which is likened to Scotland or Northern Ireland though with much more rain. Winters are cool but far milder than its latitude alone may suggest: January has a 24-hour average of 33.6 °F (0.9 °C). Summers are mild, as August’s high averages 64.4 °F (18.0 °C). Another feature of the area’s climate is the high amount of rainfall, with an equivalent average of 153 inches (3,900 mm) per year, falling more heavily in autumn and winter. The climate is so moderated that even Tallahassee, Florida has recorded an all-time record minimum—−2 °F (−19 °C) in February 1899—lower than that of Ketchikan, although Tallahassee averages around 22 °F (12 °C) warmer over the year. Further east in North America, winters on these parallels are extremely cold.

Ketchikan's Newtown neighborhood, between Downtown and the West End, its two largest neighborhoods. First Lutheran Church, at the right edge of this photo, is listed on the National Register of Historic Places. East of the church (beyond view of the photo), three adjoining streets were named Warren, G and Harding following President Harding's visit to Alaska in 1923.

.
Looking down Creek Street, immediately outside of Ketchikan's downtown near the mouth of Ketchikan Creek. Creek Street, along with a block of Fourth Avenue in Fairbanks, were Alaska's two significant red-light districts until the passage of the Anti-Crib Laws in the early 1950s.

Ketchikan serves as both an air and marine transportation hub for southern Southeast Alaska.

The Ketchikan International Airport serves as both a gateway for Alaska Airlines nonstop jet service to and from Seattle, Juneau, Sitka and Wrangell, with direct service to Anchorage, and as a bush carrier and charter aircraft hub for destinations such as Hyder, Metlakatla and Prince of Wales Island communities. Flying time to/from Seattle, Washington is approximately ninety minutes, making Ketchikan easily accessible to travelers from the continental U.S. Delta Air Lines began operating seasonal service to Seattle in May 2015.

Ketchikan receives service from two separate ferry lines. Ketchikan is a major port along the Alaska Marine Highway System's Inside Passage route. Vessels depart northbound to Alaskan ports of call and southbound to Prince Rupert, British Columbia, a six-hour trip, — where a connection can be made to the BC Ferries system — and Bellingham, Washington, a thirty-six-hour voyage. Sailings depart several times each week. Ketchikan also sees regular day service from the Alaska Marine Highway vessel M/V Lituya, a day boat that shuttles between its homeport in Metlakatla, AK and Ketchikan.

The Inter-Island Ferry Authority serves Ketchikan with daily service from its homeport in Hollis on Prince of Wales Island. 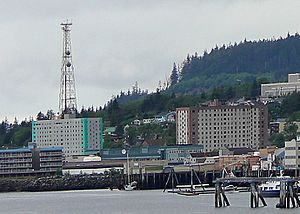 The West End (or Westend), located in the valleys of Carlanna and Hoadley creeks and across Tongass Narrows from Ketchikan International Airport, is Ketchikan's largest commercial and residential area. Shown are the city's tallest buildings, the Marine View Building and Tongass Towers. Ketchikan High School is partially visible at upper right.
For more details, see List of twin towns and sister cities in the United States

Ketchikan's former sister city of Kanayama, Japan, in Gifu Prefecture, was incorporated along with four other cities into the larger city of Gero on March 1, 2004. An educational exchange program has been active between the two towns since 1986. Every year, Ketchikan and Kanayama exchange one teacher each to instruct middle-school level language classes in their respective tongues. In addition, Kanayama sends a group of students to Ketchikan during the spring, and students from Ketchikan travel to Kanayama the following summer. Ketchikan students travel across Japan, with the majority of their time spent in Kanayama with home-stay families, attending classes and touring the town.

All content from Kiddle encyclopedia articles (including the article images and facts) can be freely used under Attribution-ShareAlike license, unless stated otherwise. Cite this article:
Ketchikan, Alaska Facts for Kids. Kiddle Encyclopedia.