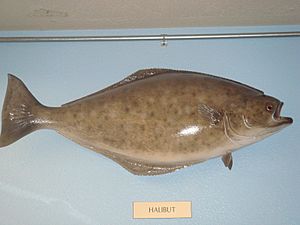 Halibut in a museum

Halibut is a kind of flatfish often used for food and living in the North Atlantic and the North Pacific oceans (they live in warm water). The halibut from the Atlantic ocean has been overfished. It might become extinct.

Their names come from haly (holy) and butt (flat fish), because it is said people like to eat them on Catholic holy-days. 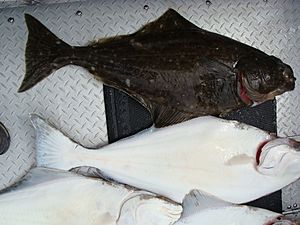 The Pacific halibut is the world's largest flatfish. The IGFA record was apparently broken off the waters of Norway in July 2013 by a 515-pound 8.6 foot fish. This is awaiting certification as of 2013. In July 2014, 76-year-old Jack McGuire caught a 482-pound Pacific halibut in Glacier Bay, Alaska (this is, however, discounted from records because it was shot to prevent injury to those on the boat).

Halibut are dark brown on the top side with an off-white underbelly and have very small scales invisible to the naked eye embedded in their skin. Halibut are symmetrical at birth with one eye on each side of the head. Then, about six months later, during larval metamorphosis one eye migrates to the other side of the head. The eyes are permanently set once the skull is fully ossified. At the same time, the stationary-eyed side darkens to match the top side, while the other side remains white. This color scheme disguises halibut from above (blending with the ocean floor) and from below (blending into the light from the sky) and is known as countershading. 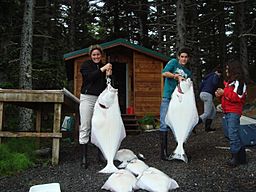 Halibut feed on almost any fish or animal they can fit into their mouths. Juvenile halibut feed on small crustaceans and other bottom-dwelling organisms. Animals found in their stomachs include sand lance, octopus, crab, salmon, hermit crabs, lamprey, sculpin, cod, pollock, herring, and flounder, as well as other halibut. Halibut live at depths ranging from a few meters to hundreds, and although they spend most of their time near the bottom, halibut may move up in the water column to feed. In most ecosystems, the halibut is near the top of the marine food chain. In the North Pacific, common predators are sea lions, killer whales, salmon sharks and humans. 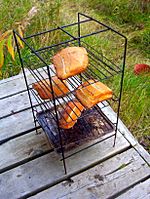 Halibut are often boiled, deep-fried or grilled while fresh. Smoking is more difficult with halibut meat than it is with salmon, due to its ultra-low fat content. Eaten fresh, the meat has a clean taste and requires little seasoning. Halibut is noted for its dense and firm texture. 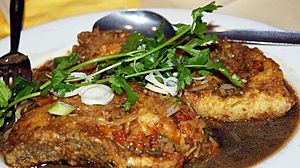 Halibut have historically been an important food source to Alaska Natives and Canadian First Nations, and continue to be a key element to many coastal subsistence economies. Accommodating the competing interests of commercial, sport, and subsistence users is a challenge.

All content from Kiddle encyclopedia articles (including the article images and facts) can be freely used under Attribution-ShareAlike license, unless stated otherwise. Cite this article:
Halibut Facts for Kids. Kiddle Encyclopedia.