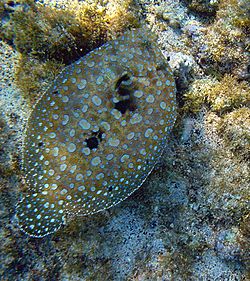 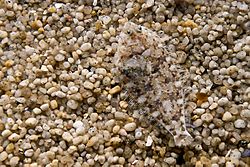 A flounder blending into its environment

Flounder are a group of flatfish species. They live at the bottom of coastal lagoons and estuaries of the Northern Atlantic and Pacific Oceans. When flounder are hatched they have one eye on each side of its head. As they grow one eye moves until they have both eyes on the same side of the head.

Flounder have many species.

Flounder feed at soft muddy areas of the sea bottom, near bridge piles, docks and coral reefs. They have been found at the bottom of the Mariana trench, the deepest known ocean canyon. Swiss scientist Jacques Piccard and US Navy Lt. Don Walsh reached a depth of 10,916 meters (35,814 ft). They were surprised to discover flounder about 30 cm long.

A flounder's food is mainly fish spawn, crustaceans, polychaetes and small fish. Flounder normally grow to a length of 12.5–37.5 centimeters (4.9–14.8 in), and as large as 60 centimeters (24 in). Their width is about half their length.

All content from Kiddle encyclopedia articles (including the article images and facts) can be freely used under Attribution-ShareAlike license, unless stated otherwise. Cite this article:
Flounder Facts for Kids. Kiddle Encyclopedia.