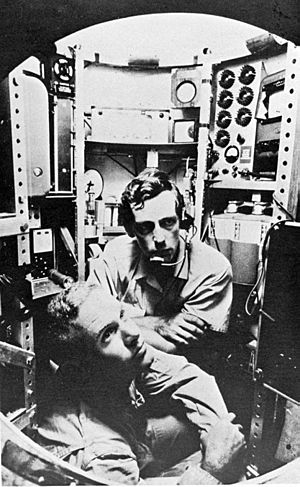 Don Walsh (born November 2, 1931) is an American oceanographer and explorer. On January 23, 1960, along with Jacques Piccard, he reached the deepest point in all of the world's oceans, the bottom of the Mariana Trench. They spent 20 minutes at the bottom, but were unable to see anything because of the mud stirred up by the bathyscape. They were the only two people to do this until March 26, 2012, when James Cameron reached the bottom. It has been reported that Don Walsh was on the team that oversaw James' journey. The recorded depth was 35,798 ft (10,911 m).

All content from Kiddle encyclopedia articles (including the article images and facts) can be freely used under Attribution-ShareAlike license, unless stated otherwise. Cite this article:
Don Walsh Facts for Kids. Kiddle Encyclopedia.