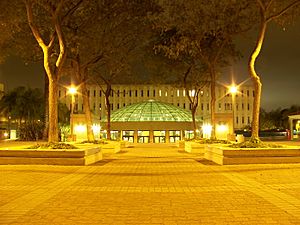 The athletics teams of the university are called the Aztecs. They have 17 varsity teams, most of which compete in the Mountain West Conference (MW). Three teams have separate conference memberships in sports that the MW does not sponsor. The women's rowing team is a member of the American Athletic Conference, the men's soccer team plays in the Pacific-12 Conference, and the women's water polo team plays in the Golden Coast Conference.

All content from Kiddle encyclopedia articles (including the article images and facts) can be freely used under Attribution-ShareAlike license, unless stated otherwise. Cite this article:
San Diego State University Facts for Kids. Kiddle Encyclopedia.