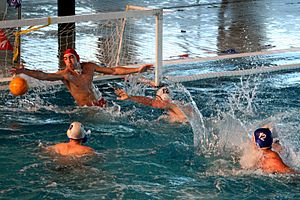 Water polo is a sport played in water with a ball. It has similarities to basketball and soccer, although players are in the pool. Players try to get the ball into the goal more times than the opposing team, without using goggles.

Water polo is a team game. Two teams play a match. Each match has four periods called quarters. The length of each period is usually between 5 and 8 minutes. Because the amount of time spent on fouls or out throws is not counted in the quarter time, an average quarter really lasts around 12 minutes.

Each team has six field players and one goalkeeper. Water polo players need to be good at swimming and ball handing. They need good reflexes and awareness.

Players must keep floating in a game. Players may not stand on the bottom of the pool.

To play water polo, you need swimwear, caps, mouth guards, a ball and a goal. The caps' design is unique. They are designed to protect head and ears.

The rules of water polo were originally developed in the mid-nineteenth century in Great Britain by William Wilson. The game originated as a form of rugby football played in rivers and lakes in England and Scotland with a ball constructed of Indian rubber, probably from the 1850s onwards.

All content from Kiddle encyclopedia articles (including the article images and facts) can be freely used under Attribution-ShareAlike license, unless stated otherwise. Cite this article:
Water polo Facts for Kids. Kiddle Encyclopedia.