Croatia is a country in Southeastern Europe. Its capital city is Zagreb.

The Republic of Croatia is a small country between the Mediterranean Sea and Central Europe. It was one of the republics of the Socialist Federal Republic of Yugoslavia. It became independent in 1991. It joined the European Union on 1 July 2013.

A very long time ago, in this territory lived Illyrian people. They were ruled by Rome. In the seventh century AD, northern Slavic people came to live in the Balkan peninsula. Austria-Hungary made Croatia free from the Ottoman Empire and was ruled in today's Croatia until 1918. In 1918 it became a part of Yugoslavia which was taken over in World War II. After a small war with Italy a fascist dictatorship formed the Independent State of Croatia in 1941. It was not independent for long. Like all other countries in Central Europe the Nazi Germany had strong influence (see also Jasenovac concentration camp).

In 1945, Croatia became a part of new, communist Yugoslavia (Socialist Federal Republic of Yugoslavia) which collapsed in 1991. Croatia is now independent for the second time.

Dalmatia is part of Croatia. Today Croatia is popular for tourists. The country's reliable economy makes it possible for Croatia to join the European Union on 1 July 2013. 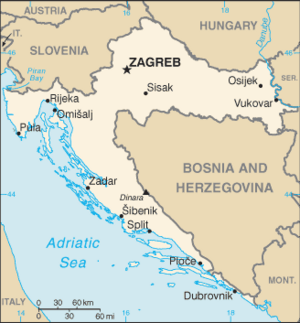 A map of Croatia

Croatia is in Central and Southeast Europe. The Adriatic Sea is the southwest border. Croatia also has borders with Hungary, Serbia, Bosnia and Herzegovina, Montenegro, and Slovenia.

Croatia is the 127th largest country in the world. The highest point is the Dinara peak at 1,831 metres (6,007 feet). Thousands of islands are part of Croatia. 48 have people living there year round. The largest islands are Cres and Krk. Major rivers are the Sava, Drava, Kupa and Danube.

Most of Croatia has a moderately warm and rainy continental climate. Average temperature ranges between −3 °C (27 °F) (in January) and 18 °C (64 °F) (in July). The coldest parts of the country are Lika and Gorski Kotar. The warmest are at the Adriatic coast.

There are several ecoregions in Croatia. The coastline, forests, mountains, and rivers give Croatia diverse flora and fauna. There are more than a thousand endemic species.

Croatia is home to the only known aquatic cave vertebrate—the olm.

There are 444 protected areas of Croatia. Those include eight national parks, two strict reserves, and ten nature parks. The oldest national park in Croatia is the Plitvice Lakes National Park, a UNESCO World Heritage Site.

Croatia adopted its constitution in 1990. It declared independence from Yugoslavia on 8 October 1991.

The President of the Republic is the head of state. The President is directly elected to a five-year term. The Constitution limits the President to a maximum of two terms. Kolinda Grabar-Kitarović became president on 15 February 2015.

The Prime Minister of Croatia is the head of government. Since 22 January 2016, the prime minister of the government is Tihomir Orešković. 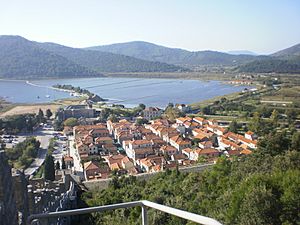 Salt mine in Ston

Croatia is one of the richest countries of the Balkan Peninsula and of the former Yugoslavia's countries. But Croatia had also the highest cost prices of the whole Central Europe. The average monthly salary/wages in Croatia standing on 739 euro or nearly $1000 USD.

The retirement age for men is 65 years and for women 60 years. The health care enjoys relative strong protection for the country's inhabitants.

The education is free and required until the child reaches the age of 15. Many choose to continue their studies in high school until the age of 18.

All content from Kiddle encyclopedia articles (including the article images and facts) can be freely used under Attribution-ShareAlike license, unless stated otherwise. Cite this article:
Croatia Facts for Kids. Kiddle Encyclopedia.