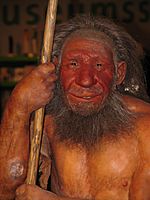 This reconstruction is at the Neanderthal Museum

Neanderthal fossils were only found in Europe, Asia Minor and up to central Asia. The first fossil was found in a limestone quarry near Düsseldorf: One of the workers found part of a skeleton, in a valley called Neanderthal. Experts Johann Carl Fuhlrott and Hermann Schaaffhausen said the bones belonged to an older form of modern humans. These bones are known as Neanderthal 1 today.

Recent research suggests Neanderthals became extinct about 40,000 years ago. Earlier research had suggested a later date; the problem is the dating of the archaeological sites where their remains have been found.

Neanderthals perhaps evolved from Homo heidelbergensis and split off (last common ancestor) from modern humans between 700,000 and 300,000 years ago.

Neanderthal remains have been found in most of Europe south of land covered by ice including the south coast of Great Britain. Finds have also been made outside of Europe in the Zagros Mountains and in the Levant.

The size of the Neanderthal brain shows that Neanderthals were probably intelligent. On average, they had larger brains than modern humans. Large brains are something of a physical weakness. That is because they consume lots of energy, make the skull more likely to be damaged, and cause difficulties during birth. These disadvantages may be less than the advantages, for example, better problem-solving, better social co-operation, language and tool-making. 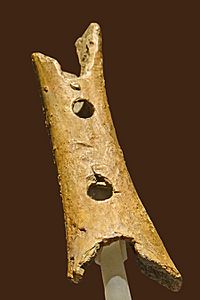 The object on display in Ljubljana Museum

The oldest flute ever discovered may be the so-called Divje Babe flute, found in the Slovenian cave Divje Babe I in 1995. It is about 43,100 years old. It is from a juvenile cave bear femur at the Divje Babe site, near a Mousterian hearth. Archaeologists ask two key questions:

Is it a flute? This has been discussed at length. The best summary is that it is certainly possible for it to be a flute, but it is unproved (not certain).

If it is a flute, was it made by Neanderthals? Again, this is not decided. It is on public display as a flute in the National Museum of Slovenia (Narodni Muzej Slovenije) in Ljubljana. The museum's visitor leaflet says that manufacture by Neanderthals "is reliably proven". This is not a general view, and again it is best to describe the idea as "not proven".

In August 1856 the specimen that was to become known as Neanderthal 1 was discovered in the Neander Valley, Germany. The material was found in a limestone quarry near Düsseldorf. A skull cap was first discovered, followed by two femurs, five arm bones, part of the left pelvis, and fragments of a shoulder blade and ribs.

Actually, some remains had been found earlier, but not recognised as a separate species from us. The Engis child from Belgium was the first Neanderthal discovered, in 1829. The second discovered was the Forbes Quarry find from Gibralter in 1848. 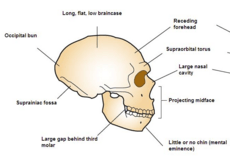 Neanderthals had stronger (more robust) build and distinctive morphological features, especially of the skull. They were much stronger than modern humans; especially in the upper body.

Neanderthal long bones and joints are thicker than ours, and some long bones have a slight curve. Both the thickness and the curve suggest the need for more strength than our species.

Since 2007, tooth age can be directly calculated using the noninvasive imaging of growth patterns in tooth enamel by means of x-ray synchrotron microtomography.

This research suggests much more rapid physical development in Neanderthals than in modern human children. The x-ray synchrotron microtomography study of early H. sapiens argues that this difference existed between the two species as far back as 160,000 years before present.

Neanderthals seemed to suffer a high frequency of fractures. These fractures are often healed and show little or no sign of infection, suggesting that injured individuals were cared for during times of incapacitation.

Neanderthals showed a frequency of such injuries comparable to that of modern rodeo professionals, showing frequent contact with large, combative mammals. The fractures suggest they may have hunted by leaping onto their prey and stabbing or even wrestling it to the ground.

They lived in Eurasia during the ice ages of the Pleistocene, and hunted large mammals, such as bison, auroch (an ancestor of living cattle), deer, reindeer, musk ox and mammoth.

The skulls are slightly larger than Homo sapiens, and this implies intelligence and probably the use of language. The skeleton, on the other hand, suggests they tended to solve their problems (such as hunting) more by force than we do.

Neanderthal stone tools are called Mousterian, and are an advance on the Acheulean tools made by earlier species of Man. Homo sapiens stone tools are far more varied still, and suggest that our species relied more on tools than the Neanderthals.

Neanderthals were almost exclusively meat eaters although their diet did include cooked vegetables. They made good tools and lived in complex social groups. Research on their remains has shown that it is possible that they had a spoken language but the nature of any such language is unknown.

All content from Kiddle encyclopedia articles (including the article images and facts) can be freely used under Attribution-ShareAlike license, unless stated otherwise. Cite this article:
Neanderthal Facts for Kids. Kiddle Encyclopedia.